Mount Merapi, Indonesia’s most volatile volcano, has erupted twice in a single day, with video showing it releasing ash and hot gas six kilometers into the sky. The volcano killed over 350 people in an eruption 10 years ago.

Sunday’s eruptions covered villages with ash on the main island of Java, but Indonesia’s Volcanology and Geological Hazard Mitigation Center did not raise the alert status which had already been at the third-highest level since an eruption last August.

Billowing smoke could be seen from afar and in one video, traffic can be seen coming to a halt while people exit their vehicles and watch or film the eruption.

Villagers living on the slopes of the nearly 3,000 meter-high volcano were warned to stay three kilometers away from the crater.

“The current danger is hot clouds rolling down from the peak and other volcanic material from an explosive eruption,” the Yogyakarta Geological Disaster Technology Research and Development Centre said in a statement.

In 2010, Mount Merapi underwent a series of eruptions believed to be the most powerful since the 19th century. Hundreds of thousands of people were forced to flee their homes, and more than 350 lives were lost. 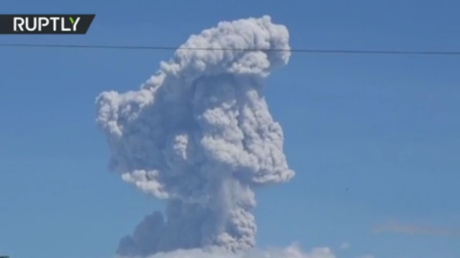