The Australian government has drawn flak over a “disappointing” vaccine rollout in remote Indigenous communities in New South Wales (NSW) – despite being warned more than a year ago about the need for “urgent and drastic action.”

In March 2020, an Aboriginal health organization in the state wrote to Indigenous Australians Minister Ken Wyatt about its “grave fears” over the potential for a Covid-19 outbreak. Although both federal and state governments were alerted, the health body said no “tangible plan” was put in place.

With the virus’ Delta strain spreading across the country, there has been a surge of cases in the western portion of NSW. More than 70 cases were detected in the small town of Wilcannia – where over 10% of the population has been infected.

NSW Health reported the first Indigenous death in the outbreak on Monday. The Maari Ma Health Aboriginal Corporation, which alerted Wyatt last year, told Guardian Australia that Wilcannia was dealing with challenges resulting from “decades of failure, at all levels of government”.

“Covid-19 hits hardest in communities where there are poor services and systems. It exposes disadvantage and inequality, and there are few more disadvantaged regions than the far west of NSW,” the group’s CEO Bob Davis said.

On Saturday, Davis wrote to Prime Minister Scott Morrison warning of the “catastrophe.” The letter revealed that “contrary to the NSW government’s assertions,” the situation in Wilcannia and the far west was “not under control.”

Noting that “mistakes and problems are mounting,” Davis said NSW Premier Gladys Berejiklian and State Health Minister Brad Hazzard had “led media and the public to believe” that “everything that could be done was being done to assist the community.”

As a result of the “chaotic” situation, Davis had warned that larger Aboriginal communities were “poised to suffer the same fate as Wilcannia” and urged Morrison to take immediate action to tackle the “unfolding humanitarian crisis.”

Morrison responded to media reports about the letters by noting that “direct measures” were being taken in Indigenous communities in “partnership with NSW government to address the situation.”

But Hazzard claimed the federal government bore responsibility for the “obviously disappointing” vaccination rollout. His federal counterpart, Greg Hunt, said the government had “put in place specific protections” for Indigenous groups last year and touted the “vastly lower” death rate in these communities in relation to the larger population.

As well, a spokesperson for Wyatt said the minister had responded to Maari Ma’s letter and stated that a “massive coordinated effort” was underway to increase vaccination numbers. The spokesperson added that the country’s National Covid Vaccine Taskforce had set up an incident management team to help tackle the western NSW outbreak and the response for Indigenous communities.

It was only on Monday that the head of this task force reportedly met with Aboriginal health groups to hash out a national Indigenous vaccine strategy. The NSW Aboriginal Health and Medical Research Council expressed surprise that a strategy was not already in place.

The council, which represents all Indigenous health services in the state, said both the federal and state governments’ responses to the outbreak are “becoming a joke,” and noted that developing a strategy now was “too little, too late.”

“We’ve had 18 months to prepare for this… there are hundreds of cases across the west now. It’s too late,” Dr Peter Malouf, an epidemiologist with the council, told the Guardian, adding that there was a “lack of coordination and leadership” at the federal and state levels. 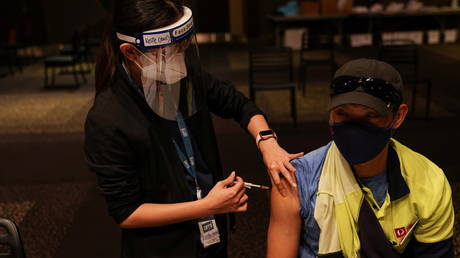