Bharat Biotech, an Indian pharmaceutical firm whose Covid-19 vaccine is being used in a nationwide immunization drive, has promised to fork over cash to those who suffer serious side effects from the drug.

Biotech’s Covaxin is one of two jabs that have received emergency approval in India. Covishield, a jab based on the AstraZeneca/Oxford formula, is also being administered in a nationwide immunization drive that began on Saturday.

In a statement, Biotech said that it will pay compensation to recipients of its vaccine who experience “serious adverse effects,” provided that the health episode is “proven to be causally related to the vaccine.”

The firm also promised a “medically recognized standard of care” in government-designated hospitals or facilities, in the event that someone experiences a severe reaction to the drug.

In Delhi alone, dozens of health workers reported mild side effects after being inoculated, and one individual was hospitalized after suffering from “severe” reactions. However, it is unclear whether the cases involved Covaxin or Covishield.

It’s not clear how much an individual would receive under the compensation agreement, but even the promise of cash is somewhat unusual. For example, in the United States, companies such as Pfizer and Moderna have total immunity from liability if something goes awry with their vaccines.

Although the Indian government has hailed Covaxin, the decision to green-light the drug has been criticized by health experts and watchdog groups. Notably, the vaccine has yet to complete phase three clinical trials, raising questions about whether it has been properly vetted before hitting the market.

India hopes to immunize 300 million people by August, with long-term plans to administer the jab to most of its population. 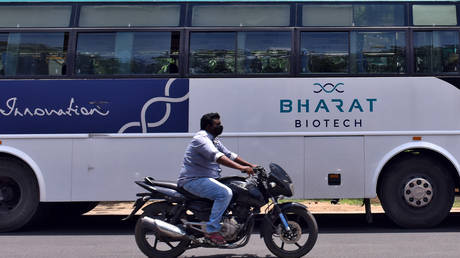