Notorious Indian gangster Vikas Dubey was shot dead in a violent failed escape on Friday, police say, although not everyone is buying the official story. Dubey was accused of killing eight cops last week.

Dubey was shot dead by police on Friday morning after he was arrested on Thursday. He was being transported in a police convoy to the town of Kanpur in Uttar Pradesh from the state of Madhya Pradesh at the time.

Kanpur: One of the vehicles of the convoy of Uttar Pradesh Special Task Force (STF) that was bringing back #VikasDubey from Madhya Pradesh to Kanpur overturns. Police at the spot. More details awaited. pic.twitter.com/ui58XBbd82

His gang massacred eight police officers in a bloody ambush last week, and used an axe to cut the head and toes off one of the police officers. Dubey went on the run, crossing five state lines before he was caught. He was facing 60 charges including murder, kidnapping, rioting and extortion.

According to Uttar Pradesh police, the car that Dubey was in overturned, injuring him and the police officers inside. He then grabbed a gun from one of the injured cops and tried to flee. He was soon surrounded by officers and opened fire after being told to surrender, police said. The officers then shot him. Dubey had three bullet wounds in his chest and one in the arm, doctors said. He was pronounced dead at the hospital.

“We had to shoot him because he stole a policeman’s gun and tried to flee,” a senior police official in Lucknow said.

The condition of the 3 injured police personnel is stable; bullets brushed by two of them. #VikasDubey had 3 bullet injuries on the chest and one on his arm: Dr RB Kamal, Principal, LLR Hospital, Kanpur pic.twitter.com/sdvUqgO8TH

However, NDTV reports that a video of the convoy crossing a toll booth at 4am local time shows Dubey was in a different car to the one that was seen on its side later. Police are yet to comment on the apparent car change. Another video shared by NDTV, taken at about 6:30am local time, shows journalists who were following the police convoy being stopped by authorities. This was reportedly about half an hour before the shooting took place.

#WATCH Media persons, who were following the convoy bringing back gangster Vikas Dubey, were stopped by police in Sachendi area of Kanpur before the encounter around 6.30 am in which the criminal was killed. (Earlier visuals) pic.twitter.com/K1B56NGV5p

A Supreme Court order was filed hours before his death, calling for him to be protected and citing concerns he could be a victim of an ‘encounter killing,’ a term used to describe an extrajudicial killing by the police that is often said to be in self-defense, when they encounter violent wanted criminals. It also called for the Central Bureau of Investigation (CBI) to probe the killing of five of Dubey’s aides and the demolition of his home last week. 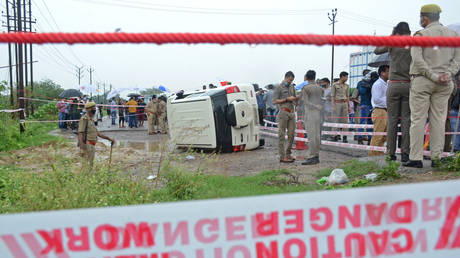