Indian security forces killed six Naga separatists during a three-hour gunfire battle near the Myanmar border on Saturday. A haul of weapons and two bombs were recovered at the scene, and one Indian soldier was injured.

The deadly incident took place in Longding district in the northeastern state of Arunachal Pradesh early on Saturday morning as part of a counterinsurgency operation with the police, the Indian Army and the Assam Rifles, India’s oldest paramilitary force.

The Indian forces exchanged heavy fire with the militants, who “fired at least 250 rounds with automatic weapons,” state police chief RP Upadhyaya told NDTV. “We had a specific tip-off about this group.”

After the almost three-hour battle, security forces recovered four AK-47 rifles, two Chinese MQ rifles, 500 bullets and two homemade bombs from the rebels. The Indian soldier injured in the fight is in a stable condition and has been taken to hospital.

The insurgents were suspected of being members of the National Socialist Council of Nagaland (Isak-Muivah) group, which calls for a sovereign state for the Christian Naga tribes living in the states of Assam, Arunachal Pradesh, Nagaland and Manipur. However, intelligence sources told NDTV that the fighters were actually part of a ‘rogue’ group and not the NSCN(IM), which has been in peace talks with the Indian government since 1997. 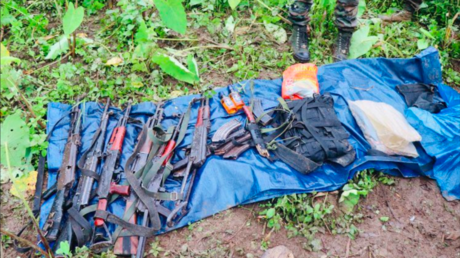