Close
Trending News
HomeWorldIndia to be compensated by Italy for shooting of fishermen in 2012, but won’t prosecute involved marines

India to be compensated by Italy for shooting of fishermen in 2012, but won’t prosecute involved marines

India to be compensated by Italy for shooting of fishermen in 2012, but won’t prosecute involved marines

Two Italian marines blamed for killing a pair of Indian fishermen while protecting an oil tanker in 2012 won’t be prosecuted by India, but Rome must pay compensation to New Delhi, The Hague court has ruled.

It was decided by three votes to two that “the marines are entitled to immunity in relation to the acts that they committed during the incident,” the Permanent Court of Arbitration (PCA) said in a statement on Thursday.

The ruling means that India has no jurisdiction over Salvatore Girone and Massimiliano Latorre, and won’t be able to prosecute them. Yet the two will still face trial in Italy, as Rome has already promised to resume its own criminal investigation into the events of February 15, 2012.

Jurisdiction over the case has been a major bone of contention between the two nations. New Delhi insisted the Italians should have been tried by its laws as the victims were Indian citizens. Rome disagreed, arguing that the incident occurred in neutral waters, with Girone and Latorre being aboard a vessel flying an Italian flag.

Italy should, however, compensate India for the damage caused by the deadly shooting eight years ago, the judges said, leaving it to the two nations, whose relations soured significantly as a result of the incident, to figure out the amount of the payment.

The marines, who were on an anti-piracy mission protecting the Italian oil tanker ‘Enrica Lexie’ in 2012, claim that they mistook the Indian fishermen for pirates and fired a warning shot, which ended up killing them.

Girone and Latorre were arrested by the Indian police after the shooting and faced charges of murder. However, they were released back to Italy after several years, pending the resolution of the dispute in The Hague. 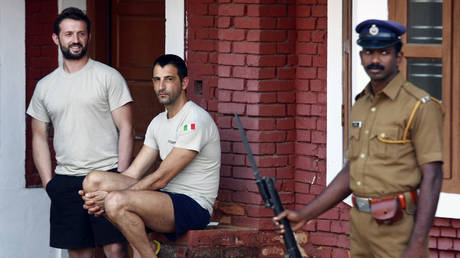 Spotify Duo gets you TWO membershi...

Coronavirus: ‘Waves on waves’ of n...