India now has more than half-a-million confirmed Covid-19 cases, as the viral outbreak ravages through the nation of 1.3 billion people. Large cities like Delhi are scrambling to deal with the numbers of patients.

The number of coronavirus infections in India has reached 509,306 after more than 18,500 new cases were added to the tally, government figures, released on Saturday, have shown. A total of 15,685 people have died from the disease there, including 385 in the 24 hours since the previous update.

The country has the fourth-largest Covid-19 outbreak in the world, after the US, Brazil and Russia, and has surpassed Iran in terms of their official death tolls. The pandemic may peak in some parts of India within weeks, with projections saying it may surpass the one-million-cases benchmark before the end of next month.

The coronavirus has hit India’s densely populated cities particularly hard. The capital, Delhi, has nearly 80,000 Covid-19 cases and is mobilizing resources to provide extra space and medical personnel to quarantine and treat the infected.

The city of around 20 million people has some 13,200 beds for Covid-19 patients and wants to add at least 20,000 more in the coming weeks. Army and paramilitary doctors have been called to staff quarantine facilities.

As the numbers grow, some of India’s regions consider reintroducing restrictions, which had been gradually eased recently, to alleviate the impact on the economy. India introduced a harsh nationwide lockdown in late March. 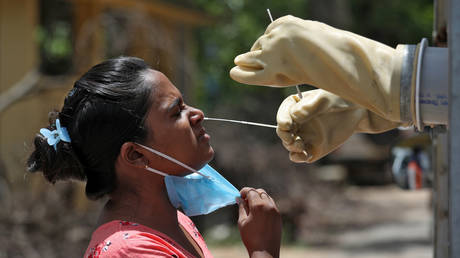