An official statement announcing the reopening of India’s borders for international tourists could be released in the coming days, the country’s media have reported. As a bonus, half a million visas will be issued free of charge.

For the first time in one-and-a-half years, India could welcome foreign travelers by the end of this month, the country’s biggest news agency, the Press Trust of India (PTI), said on Sunday. A formal announcement is expected within the next 10 days, according to PTI, citing a source in India’s Ministry of Home Affairs.

Authorities are still deciding whether to apply any limiting conditions for travelers, such as proof of vaccination, or whether to restrict arrivals from certain countries, a source added.

In a move to resuscitate its tourism industry, the Indian government – seeing a decline in Covid-19 cases – has also decided to issue entry visas free of charge. The complimentary visas will be given out until the end of March 2022, or to the first 500,000 travelers, whichever occurs sooner, according to the report. News of the free visas has been confirmed by Prime Minister Narendra Modi, the Times of India reported on Sunday.

To help revive the country after a nationwide lockdown that was introduced in March last year, vaccinations are being prioritized for states that are popular with international tourists, Modi said on Saturday. He mentioned Goa in particular as “a strong marker of Brand India,” and a state of boundless possibilities, saying it should play an important role in bringing travelers back to the pandemic-stricken country.

Having praised Goa’s vaccination efforts, the Indian prime minister said 100% of the state’s eligible population have received at least one vaccine dose. As long as hotel employees, taxi drivers and shopkeepers are jabbed, people will travel to Goa with a sense of safety, Modi suggested, calling it a “major milestone in the fight against coronavirus… [which] fills me with great joy.”

India is among the countries that suffered most from Covid-19, with nearly 33.5 million confirmed cases and almost 445,000 deaths. However, it has recently started seeing a decline in active infections. According to its Health Ministry’s latest bulletin on Sunday, 30,773 new cases and 309 deaths have been registered in the past 24 hours. India’s recovery rate stands at some 97.6%. More than 14.5% of its population have been fully vaccinated. 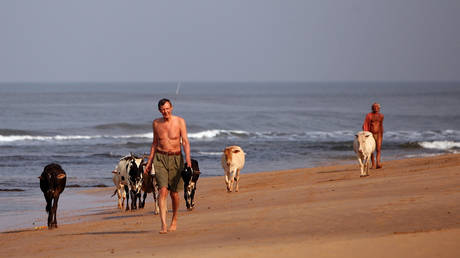 Volcano erupts on Spain’s Canary I...