Former British colonies India, Pakistan and Bangladesh, which have been entangled in decades of bitter rivalry, should actually be “merged” into a single state, a regional Indian minister has suggested.

The surprise suggestion was floated by Maharashtra state Cabinet Minister Nawab Malik, the Mumbai president of the Nationalist Congress Party (NCP), on Sunday. The politician was asked to provide a comment on an earlier remark by Devendra Fadnavis, leader of a local chapter of India’s ruling Bharatiya Janata Party (BJP), who said Pakistan’s city of Karachi will be a part of India one day.

“We have been saying that India, Pakistan and Bangladesh should be merged.” Malik stated.

If the Berlin wall can be demolished then why can’t India, Pakistan and Bangladesh come together?

“If BJP wishes to merge these three countries and make a single country, we will welcome it definitely,” he added.

India and Pakistan gained independence in the late 1940s as the British colonial empire crumbled. The two nations have repeatedly engaged in military conflicts of varying scale since then, further fueled by animosity between Hindus and Muslims. The disputed region of Kashmir, claimed by both nations as a whole, yet controlled in roughly two equal parts, remains a constant source of tensions and military run-ins between New Delhi and Islamabad.

Bangladesh, which used to be Pakistan’s exclave known as East Bengal, broke away from Islamabad in 1971 after a war. During the conflict, the proponents of independence received broad support from India and Pakistan ultimately suffered a painful defeat.

Given such a background, the idea to somehow “merge” the three back into a single state appears to be quite far-fetched. The suggestion sparked a heated debate online on how exactly this could be achieved, with many users expressing quite extreme views, either pro-Muslim or pro-Hindu.

Him:
“India-Pakistan-Bangladesh should be merged . . . .”

These are like #ShekhChillisTalk . Why should Hindus accept billions of extremists & fundamentalist muslims from Pakistan & Bangladesh?

Some users – rather jokingly – noted if one is actually serious about bringing together territories of the former British Raj, the island nation of Sri Lanka should be thrown into the mix as well.

While some tried to be reasonable, suggesting that a EU-like structure might actually work, plenty of commentators dismissed Malik’s idea as utter nonsense.

There could be union like European Union. This would enable trade, tech transfer, better lives of the people in the region.

The wire connecting his brain with tongue is missing… They shall be merged…. 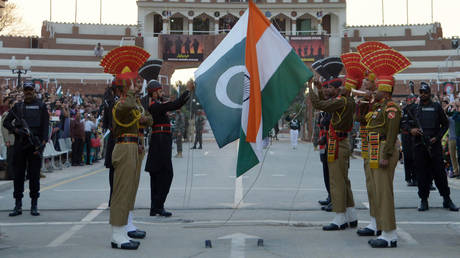