New Delhi has greenlighted a massive deal with Moscow that will see Sukhoi and MiG build brand new fighter jets for the Indian Air Force. Quite a few war planes already in use with the military will also be refurbished.

12 Su-30MKIs and 21 MiG-29s, built from scratch in Russia, will join the fighter fleet of the Indian Air Force (IAF), the country’s government confirmed on Thursday.

Russian engineers will also upgrade 59 MiG-29s already operated by the IAF, with the cost of both projects totaling roughly $2.4 billion. India received the first batches of the lightweight, single-seater jet back in the 1980s, meaning that it is arguably in need of a 21st-century revamp.

Both planes – designed to win air superiority and defend homeland airspace – have long been familiar to Indian aviators. Estimates say there are over 270 Su-30s and 65 MiG-29s forming the backbone of IAF frontline force. The rest include the French Mirage 2000 and Rafale jets as well as domestically-made Tejas.

Indian media previously speculated that acquiring more combat jets from Russia was high on the agenda of Defense Minister Rajnath Singh, who visited Moscow last week. Aside from representing the Indian government at the grand Victory Day parade, Singh met with Yuri Borisov, Russia’s vice premier in charge of the military industry.

The exchange was “very positive and productive,” the Indian minister said in a statement that was light on details at the time.

Aside from that, New Delhi expedited other weapon procurements, such as the S-400 air missile defense system and critical spares from Russia. Originally scheduled for 2021, the first of five S-400 batteries will arrive in India by the end of the year, Russian media reported, citing Indian military sources. 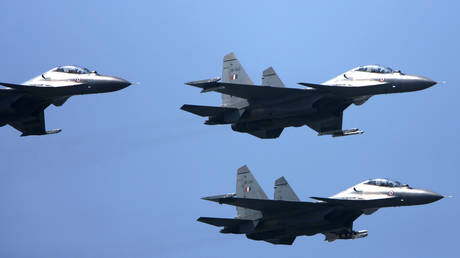 Teenagers must be kept ‘under cont...