A test of India’s Nirbhay cruise missile aborted after eight minutes as the missile experienced a “technical glitch.” The terrain-hugging missile has already been deployed along the Line of Actual Control with China.

India’s Defence Research and Development Organisation (DRDO) aborted 800km-range Nirbhay cruise missile minutes after its launch on Monday. The missile has been tested on at least six previous occasions since 2013 and had completed trial objectives despite multiple failures.

It is believed that Monday’s trials were to test the performance of a new and indigenous turbofan engine, called Manik. Government sources told the Hindustan Times that the missile was fired from a test base in Odisha in the Bay of Bengal, “but developed a snag and the trial was aborted 8 minutes later.”

In previous tests, the Nirbhay missile, which can carry both conventional and nuclear warheads and can be launched from multiple platforms, has demonstrated a capability to cruise at very low levels, covering waypoints as low as 5 meters above sea level. Such low-level flight would allow the subsonic missile to avoid enemy radar, improving the chances of carrying the warhead to its intended target.

The Nirbhay was the 7th missile to be tested by the DRDO in the last 30 days. Earlier tests included the supersonic, surface to surface ‘Shaurya’ strategic missile and a Laser-Guided Anti-Tank Guided Missile (ATGM).

India’s stepping up of its defense testing is seen as a response to the ongoing standoff with China along the Himalayan frontier. Despite multiple failures in previous trials, a “limited number” of Nirbhay missiles were earlier deployed to the Line of Actual Control (LAC), the de facto border with China in the Himalayas. Beijing has also deployed missile capabilities to the region, including two new Surface-to-Air Missile (SAM) to deter Indian fighter jets.

Troop numbers and support infrastructure have also been increased by both countries despite Moscow brokered talks in September where New Delhi and Beijing agreed on a five-point plan to resolve the prolonged border face-off, including an immediate disengagement. 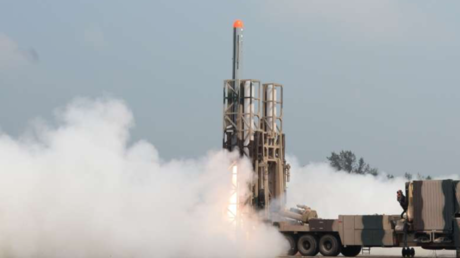