Astronomers at the Gemini-North Telescope atop Mauna Kea in Hawaii have witnessed the afterglow of a short gamma ray burst located an astonishing 10 billion light-years away – one of the most distant such phenomena ever witnessed.

The science is pretty clear: the farther away an object is from Earth, the dimmer its light will be when sighted from our planet, thus making it harder to spot through a telescope. Which is why researchers from Northwestern University were surprised to have caught a glimpse of one of the most powerful types of explosion in existence – all the way on the other side of the universe.

The paper, published in the Astrophysical Journal Letters on Tuesday, was authored by Northwestern University assistant Professor Wen-fai Fong, who said that the team “certainly did not expect to discover a distant SGRB, as they are extremely rare and very faint.”

SGRBs are usually caused by the merging of two neutron stars, which releases an incredible burst of light energy. By the time it reaches Earth, though, that energy release is both faint and fleeting. Such bursts last but a few hours before fading into nothing.

With this SGRB, dubbed SGRB181123B, researchers were able to spot it through a combination of precise science and sheer luck.

Detected at first on the evening of Thanksgiving in 2018 by NASA, the Northwestern team quickly remotely accessed the Gemini-North Telescope to measure the size of the glow. Some follow-up observations from Chile and Arizona helped paint a picture about what the afterglow meant.

Due to the team’s swift action, ”we were able to obtain deep observations of the burst mere hours after its discovery,” said Kerry Paterson, another of the study’s authors.

The discovery is important due because the flash occurred when the universe was just a teenager – at about 30 percent of its current age – and offers a rare glimpse into neutron mergers in a period known as the ‘cosmic high noon’.

“Finding an SGRB at this point in the universe’s history suggests that, at a time when the universe was forming lots of stars, the neutron star pair may have merged fairly rapidly,” said Fong. 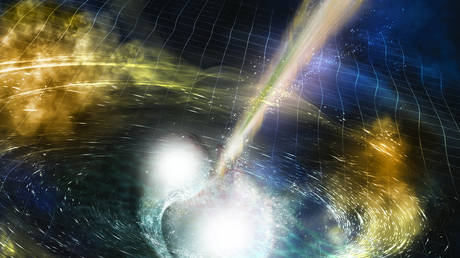