Israeli Defense Forces aircraft have struck Gaza Strip after two rockets were fired from the Palestinian enclave into Israeli territory, blaming Hamas for the incident.

Local media reported a blackout throughout the coastal enclave and explosions in eastern and southern parts of Gaza late on Friday.

There were also reports of Israeli tanks and artillery firing into the strip. Israeli aircraft targeted “infrastructure used for underground activity” by Hamas, while tanks targeted several Hamas outposts, an IDF spokesman said.

The strikes came after two rockets were fired into Israeli territory, near the town of Sderot. Palestinian Islamic Jihad may have been responsible for the attack, according to Gaza media, but Israel has long held that any incoming fire from Gaza is the responsibility of Hamas, a rival Islamist movement that runs the government inside the enclave.

No one has officially claimed responsibility for the rocket attack, in which no casualties or property damage were reported

The incident comes after Hamas warned that Israeli plans to annex settlements in the West Bank would be a “declaration of war on the Palestinian people” as the group’s spokesman put it on Thursday. 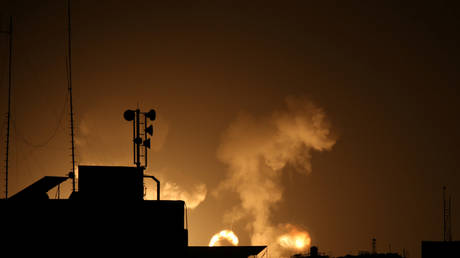 Brits will be able to go on holida...