The Israeli military has launched airstrikes at “terror targets” in Gaza, responding to missile attacks coming from the Palestinian territory. This week marked an escalation of violence between Israel and Hamas.

The Israel Defense Forces (IDF) reported attacking targets in Gaza overnight, saying they belonged to the militant movement Hamas. The strikes were carried out to punish the Palestinian group – which is considered a terrorist organization by Israel – for launching missiles and incendiary balloons and kites at Israeli territory.

Earlier tonight, rockets were fired from Gaza into Israel.

We will continue to operate against any attempts to harm Israeli civilians.

Earlier on Saturday, two rockets fired from Gaza were intercepted by Israel’s Iron Dome system. Another rocket reportedly slammed into a yard in southern Israel, causing damage to a house. A 58-year-old man was injured by shattered glass in the incident, local media said.

The rockets were fired after the IDF retaliated for launches of incendiary balloons from Gaza territory as well as clashes near the border wall on Saturday. The Israeli military said Palestinian protesters “burned tyres, hurled explosive devices and grenades towards the security fence and attempted to approach it.” Palestinian health officials said two protesters were injured by live bullets amid the clashes.

The balloons caused at least 19 fires in southern Israel on Saturday, the national Fire and Rescue Service said. Similar attacks throughout the week caused about 100 fires, most of them minor and causing no significant damage.

Sunday’s violence marks the fifth consecutive day of retaliation and counter-retaliation between the two sides, who blame each other for the escalation. In addition to military action, Israel imposed restrictions on Palestinians living in Gaza, shutting down the Kerem Shalom goods border crossing and the fishing zone of Gaza.

Amid this week’s escalation, Israel also reportedly blocked financial aid that the Qatari government regularly provides to Gaza. Transfer of the monthly payment of $30 million was frozen until the attacks are stopped, the newspaper Haaretz reported, citing government sources.

Palestinians in Gaza have lived under an Israeli blockade since 2007, when Hamas took control of the area after winning a conflict with rival Palestinian group Fatah. According to human rights groups, the estimated 2 million people face a constant struggle for essential supplies. 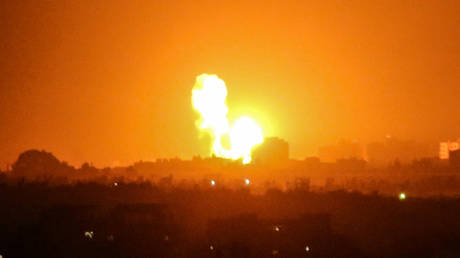 Schools reopening could be DELAYED...