Despite escaping the coronavirus pandemic largely unscathed, Iceland has decided to open its pristine landscapes up to those suffering under lockdown elsewhere in the world, inviting them to ‘let it out’ with a piercing scream.

Visit Iceland, the official marketing department for the country’s tourism board, launched its ‘Let it Out’ campaign on Wednesday, hoping to tempt tourists to the island by offering them the opportunity to let out all their pent-up stress and frustrations stemming from the pandemic by literally screaming their lungs out into the Icelandic wilderness.

The creatives behind the campaign cite the stress-relieving effects of screaming, which “literally [allows] your amygdala to release the stress stored there and move forward,” as the reasoning behind the somewhat unnerving initiative.

Several yellow speaker boxes play the recorded and uploaded screams of people from around the world in various remote locations across the island nation, including Festarfjall in Reykjanes Peninsula, Djúpivogur in the east and the Skógafoss waterfall in the south.

Users also receive a video recording of their screams being played out, and you can hear a sample of the screams on the campaign’s website. (WARNING: It should go without saying, but the screams are loud, so you might want to turn the volume down before clicking!).

Not everyone was quite so convinced it was such a good idea, however, with some suggesting it might have the opposite effect on potential tourists.

“What a crappy ad. Nobody wants to go to Iceland if there are loudspeakers with shouting people all over the place. It’s supposed to be the opposite – quiet!” wrote one YouTube user.

“Boggles the mind how all this money spent on an ad campaign encourages people to come and destroy one of the best things about Iceland – the solitude and quiet. Inspired by Idiocy!” agreed another.

According to Sigridur Dogg Gudmundsdottir, director of tourism at Islandsstofa, the idea is to draw tourists to the island by highlighting how much space there is for visitors to explore the scenic surrounds in relative safety from the coronavirus.

“Across the world, people have been through a lot in the last few months,” Gudmundsdottir said. “In Iceland, we are lucky enough to have vast open spaces and beautiful nature that is the perfect place to let out frustrations.”

“When people are ready to resume travelling, they can come and experience it for themselves,” he added.

Iceland has been welcoming visitors from the EU and UK since July 15, when restrictions on all businesses, entertainment venues, restaurants and bars were lifted.

According to figures from the Johns Hopkins Coronavirus Resource Center, Iceland has recorded just 1,911 confirmed cases of coronavirus infection, with 10 fatalities reported. 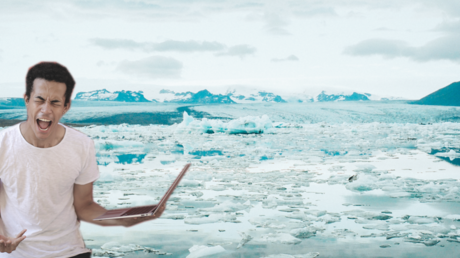