While “clanking” about rejecting foreign interference, Australia is meddling in China’s affairs itself by halting an extradition treaty with Hong Kong and offering its residents a safe haven, Beijing’s embassy stated.

Prime Minister Scott Morrison’s government announced earlier on Thursday that it will grant Hongkongers a five-year visa extension and “a pathway to permanent residency.”

“There will be citizens of Hong Kong who may be looking to move elsewhere, to start a new life somewhere else, to take their skills, their businesses,” Morrison said.

Later in the day, Beijing’s diplomatic mission in Canberra hit back at the announcement, saying that it “strongly deplores and opposes the groundless accusations and measures announced by the Australian government with regard to Hong Kong.”

Calling the safe haven offer “a serious violation of international law,” it stated that Morrison’s government is actually engaging in what it is officially against.

Australia has “blatantly interfered” in China’s domestic affairs although it “has been clanking that they oppose “foreign interference,’” the statement reads. “Its hypocrisy and double standard is exposed in full.”

Separately, China’s Foreign Ministry warned that it reserves the right to respond in kind to the Australian offer, as spokesman Zhao Lijian told reporters.

Morrison has also said that Australia is suspending its extradition agreement with Hong Kong as China’s newly-adopted national security law marks “a fundamental change of circumstances.” The hotly-debated legislation gives Beijing more power to deal with secession, subversion, terrorism, and collusion with foreign powers aimed against China in Hong Kong.

The prime minister’s announcement came days after the country escalated a travel advisory, telling Australians working and living in Hong Kong to “reconsider your need to remain” there if they feel threatened by the national security law.

It also alleged that Australian citizens are at risk of “arbitrary detention” in mainland China – a claim the Chinese Embassy brushed aside as “completely ridiculous and disinformation.” 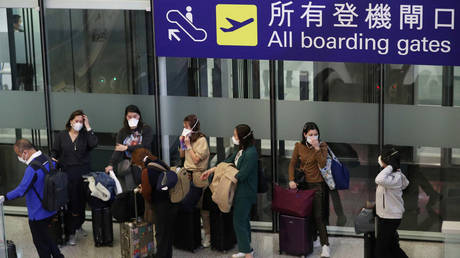