Prime Minister Viktor Orban explained on Wednesday that Hungary vetoed the European Union’s 2021-2027 budget and post-coronavirus recovery fund because of the “blackmail” that demands mandatory support for immigration.

“After accepting the current proposal, there would be no barrier from tying the disbursement of funds to member states to supporting immigration, and blackmailing the countries that oppose immigration with budgetary sanctions,” Orban said.

Hungary and Poland vetoed both the budget and the recovery plan for economies depressed by the Covid-19 pandemic on Monday, arguing that the budget law included a clause that makes access to money conditional on respecting the rule of law. But the EU’s €1.8 trillion ($2.14 trillion) financial package does not have any specific clauses about immigration.

Orban has long opposed mass immigration, saying that it hurts national and European Christian identity. In March, he urged the EU to stop a new wave of migrants trying to cross the border from Turkey. “As a last resort, as in 2015, there are the Hungarians,” Orban said at the time. “The EU border must be defended … which Hungary will do.”

Hungary’s state secretary for international communications, Zoltan Kovacs, also commented on the veto, noting that it “was not caused by Hungary, but by those who created the conditions leading to it.” New rules linking EU funds to upholding the rule of law breached the EU’s founding treaty and a deal in July not to tie funding to “political conditions,” Kovacs said.

The opposition to the ‘rule of law’ clause by Hungary and Poland had been sparked by the EU’s investigation into the independence of courts, non-governmental organizations, and the media in both countries.

Meanwhile, European Economics Commissioner Paolo Gentiloni said on Tuesday that the German EU presidency was working to resolve the dispute quickly. Poland and Hungary had no economic interest in blocking the EU’s plans, he said, because they “are among the biggest beneficiaries” of the EU budget and are also suffering a heavy impact from the coronavirus pandemic. 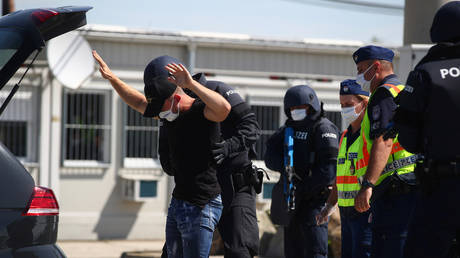 Taiwan grounds its ENTIRE FLEET of...