Hundreds of Malaysian doctors have staged walkouts from major hospitals, demanding that the government offer better job security and wages. The protests come amid a spike of coronavirus infections.

Medical workers protested en masse across the country to fight for the better treatment of over 20,000 junior contract doctors that have worked at the forefront of the coronavirus pandemic. “Our strike is not about resistance, we only want the government to give us the same rights and benefits that permanent doctors get,” one of the participants told local media.

Thread of nationwide #HartalDoktorKontrak. This is just the beginning! pic.twitter.com/3PZtVpUPG0

The junior doctors account for almost half of the country’s medical doctors in the public healthcare system. They claim that they are underpaid, have less job security and opportunities in comparison to doctors on permanent contracts. The junior staff bashed the contract system, claiming that the government failed to complete its promises since the scheme came into force in 2016.

Striking doctors faced pressure to not act from healthcare managers, as well as from local police, who said that they would potentially probe the protests for breaking coronavirus restrictions.

The Southeast Asian country has been grappling with a recent surge in coronavirus cases. Malaysia reported a record high of some 17,000 infections on Sunday, which pushed the country over the one-million case mark. Since the outbreak of the pandemic, Malaysia has recorded over 8,200 deaths. 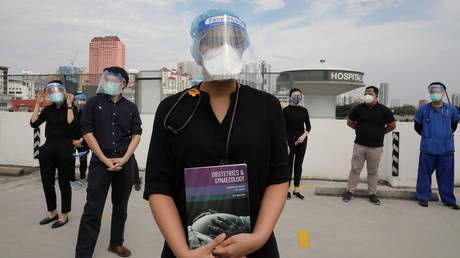