Indonesia’s Mount Merapi volcano erupted Thursday morning, forcing some 500 residents to flee amid fears of a larger eruption as seismic activity continued throughout the day.

Smaller eruptions continued throughout Thursday as evacuations continued, sending plumes of hot clouds hundreds of meters into the air above the 2,968-meter (9,737-foot) mountain and small avalanches of volcanic material down its slopes.

Thousands of people had already been displaced by eruptions at Indonesia’s most active volcano in the past 12 months, and the alert level in the area was raised to its second-highest level in November after increased seismic activity was detected.

“Until now, the potential danger is not more than 5 kilometers (3 miles),” the chief of Yogyakarta’s Volcanology and Geological Hazard Mitigation Center, Hanik Humaida, said in a statement.

An estimated 250,000 people live within a 10-kilometer radius of the volcano.

The volcano belched ash and hot gas up to six kilometers in the air in June but no casualties were reported.

The last major eruption at Mount Merapi was in 2010 and resulted in the deaths of 347 people and the evacuation of 20,000. 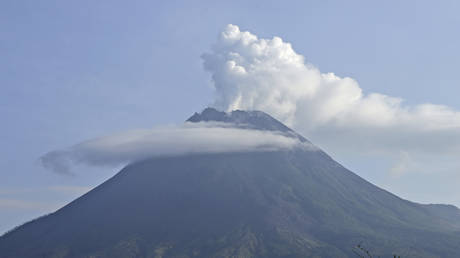 ‘Tipping point’ of the pandemic: W...

‘Nightmare scenario is out the win...