NASA has shared an incredible view of the ‘Knife Edge Galaxy’ in all its glory. With a spiral shape similar to our own Milky Way, the galaxy boasts a mysterious arm of stars which has caused huge debate among astronomers.

The newly released Hubble Space Telescope snap was painstakingly processed by amateur astronomer-cum-citizen scientist Judy Schmidt and showcases a remarkable perspective on the 150,000 light-year-wide object – officially designated NGC 5907 – which is some 56 million light years away in the northern constellation of Draco.

Originally discovered in 1788 by German-born British astronomer William Herschel, this particular galaxy has captivated astronomers ever since it was first spotted because of its unusual features, which are sadly somewhat obscured from the side-on angle.

The Knife Edge Galaxy boasts a ghostly arm that waves out from the bright glow in its center, mostly obscured by the vast amount of galactic dust around the solar clusters within.

This arm is a single giant stream of stars, over 700,000 light-years long, that loops out from the galaxy in spectacular fashion. Astronomers had long suspected that the arm was either the remnants of a dwarf galaxy torn apart by NGC 5907 before a merger some four billion years ago, or the leftovers from a merger with another galaxy of equal size.

However, a recent theory suggests that it may have been a close encounter with a “tidally disrupting satellite” which ripped the long stream of stars out from the galaxy’s core – though this particular suggestion is still up for debate, subject to more in-depth analysis in the near future. 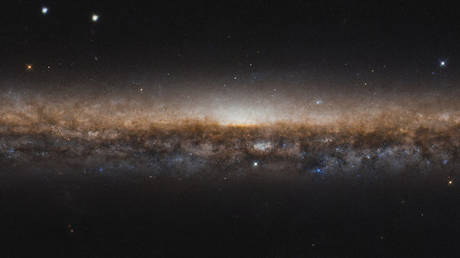