Leaked documents show how the Foreign & Commonwealth Office spent millions setting up a clandestine network to churn out pro-rebel material, much of it aimed at winning the hearts and minds of kids.

A swath of internal UK Foreign & Commonwealth Office (FCO) files have exposed a number of covert ways in which London sought to both propagandize Syrian children and turn them into weapons, in a vast, long-running information warfare campaign at home and abroad.

The documents are just some of the bombshell papers released by hacktivist collective Anonymous, outlining a variety of cloak-and-dagger actions undertaken by the UK government against the Syrian state over many years.

The overriding objective behind them all was to destabilize the government of Bashar Assad, convince Syrians, Western citizens, foreign governments, and international bodies that the Free Syrian Army (FSA) was a legitimate alternative, and flood media the world over with pro-opposition propaganda.

Children figured prominently in a number of the plans, in more ways than one. ARK, a shadowy firm headed by veteran FCO operative Alistair Harris, was central to many of these covert efforts, which may have cost the FCO many millions in total.

A separate proposal submitted to the FCO by communications firm Albany details ways of offering clandestine support to “oppositionist grassroots media activism.” The company conducted numerous psyops in Syria – including managing the Syrian National Coalition’s communications during the 2014 Geneva II peace conference – and collaborated extensively with ARK in the process.

Creating “fictional material” such as radio dramas and “digital comic strips for internet deployment” was listed one of the key ways the firm would “bolster the values and reputation of the Syrian opposition,” and undermine the government’s “core narrative and legitimacy.”

Precisely which projects emerged from these pitches, if any, isn’t clear from the files themselves, but in May journalist Ian Cobain revealed Hentawi, a comic aimed at 9-to-15 year-old Syrians, was a clandestine creation of the FCO, and its founder Naji Jerf was an employee of a firm contracted by the department.

The files released by Anonymous indicate that the company in question was ARK, who provided Jerf’s CV – it reveals that from 2006 to 2007, he was Editor of a UAE-based magazine, Attfal Al Yaom (Children of Today).

Such experience undoubtedly assisted in the production of Hentawi, which featured very slick comic strips slyly extolling equality and democracy and other values, quizzes and games, and inspiring stories of athletes, celebrities and the like.

Cobain also exposed how FCO contractors produced animated films for Syrian children, such as Goal to Syria, about a young footballer who scores the winning goal in the 2027 Asia Cup final, leading the Syrian team to victory.

As the player prepares to attempt a deciding penalty, his mind flashes back to Aleppo in 2014. In the wake of a bombing raid, the White Helmets rush in an ambulance to rescue him from rubble – en-route they pass a local man who screams, “first they bombed us with chemicals, and now barrel bombs!”

After prising the boy free and carrying him to safety, a White Helmet shoots him the peace sign. Back in 2027, he shoots and scores, with the commentators praising the “lion of Damascus” for his heroic victory. As the screen fades to black, viewers are presented with text hailing the White Helmets’ achievements during the conflict, claiming the group “represent the humanity and spirit of the Syrian people.”

Other leaked FCO files make clear ARK played a pivotal role in constructing and promoting the White Helmets’ benevolent image worldwide, developing “an internationally-focused communications campaign to raise global awareness” of the group in order to “keep Syria in the news.” Goal to Syria was shown at the 2016 Cannes Film Festival, and can thus be considered another example of this effort in practice, on top of the clip’s domestic purpose.

Somebody think of the children

The company’s expansive network of freelancers in the country, which ARK itself extensively trained at quite some cost to the FCO, were said to “frequently cover such events.” These reports would then be fed to ARK’s “well-established contacts” at major news outlets including Al Jazeera, BBC, CNN, Guardian, New York Times, and Reuters, “further amplifying their effect.”

These outlets similarly “amplified” the impactful propaganda of other FCO contractors working in Syria. In July 2019, an image of two young Syrian girls trapped in rubble in Idlib attempting to haul their sister to safety as she dangled off the precipice of a dilapidated building, their father looking on in horror above, spread far and wide on social media.

The photo, snapped by a photographer for popular Syrian news service SY24, was reported the world over. Unbeknownst to readers, SY24 was created and funded by The Global Strategy Network (TGSN), founded by Richard Barrett, a former MI6 counter-terrorism director.

In a file submitted to the FCO, TGSN boasted of how “campaigns” it broadcast via SY24 generated “huge global coverage,” having been seen by “many hundreds of millions of people,” and “attracting comment as far as the UN Security Council.”

SY24 content was produced by a network of stringers TGSN both trained and provided with equipment, including “cameras and video editing software.” The firm drew particular attention to a team of female stringers it tutored, “who provide about 40 percent of all SY content,” and were part of “a broad ‘network of networks’” enabling TGSN “to drive stories into the mainstream.”

As with Albany and ARK, TGSN engaged in activities to propagandize Syria’s youth, offering to bring projectors to refugee camps and “rural areas” to screen material to young residents, including “prosocial cartoons for children, films chosen with regard to conflict sensitivity and gender, and popular football events to drive participation.”

The company also conspired with ARK on several surreptitious endeavors, including a campaign dubbed ‘Back to School.’ As its name implies, under its auspices young Syrians in opposition-occupied Idlib returned to school – the two FCO accomplices promised to ensure it was a major media event.

In conjunction with Idlib City Council, opposition commanders, and other elements on the ground, ARK and TGSN planned a comprehensive, “unified” communications campaign using “shared slogans, hashtags and branding.” Rebel fighters were to be engaged in order to “clear roads” and “enable children and teachers to get to schools,” all the while filmed by the pair’s voluminous stringer network, footage which would be “disseminated online and on broadcast channels.”

It is in the context of such cynical, heartstring-tugging child exploitation by the FCO that the phenomenon of Bana Alabed gains an even more suspicious, sinister dimension.

In 2016, at the age of just seven, Bana briefly became a celebrated figure among advocates of Western military intervention in Syria, for tweets she allegedly posted documenting the siege of Aleppo.

Within days of her account being registered in September that year, she amassed a sizeable following, firing messages at Assad, Vladimir Putin, and Barack Obama, using hashtags such as #StandWithAleppo, #HolocaustAleppo, #MassacreInAleppo and #StopAleppoMassacre. She also gained a prominent media profile, was dubbed by more than one pundit the “Anne Frank” of the Syrian crisis, and was invited on to major news networks to denounce Assad and the Syrian Arab Army.

Nonetheless, critics were puzzled as to how such a young girl in a city subject to frequent power cuts could have acquired such an apparent mastery of the English language, and tweet so frequently. Concerns were also raised about the interventionist nature of some of the tweets ostensibly posted by Bana, including an apparent endorsement of the prospect of World War III.

Even mainstream journalists acknowledged her video statements were almost undoubtedly scripted, The New Yorker stating Bana was clearly “being coached…to communicate her thoughts in a language she is only beginning to learn.”

Bana went on to ink a lucrative deal with publishing giant Simon & Schuster, after signing up with talent and marketing agency The Blair Partnership, founded by Neil Blair, board member of the UK branch of the Abraham Fund, a group sponsored by Israeli bank Hapoalim, which finances the construction of Jewish-only settlements in the occupied West Bank.

Bana had largely disappeared by July the next year, when Syrian journalist Khaled Iskef visited the Alabeds’ abandoned home. He found it was situated round the corner from an al-Nusra headquarters, and less than 400 meters from Al-Qaeda’s Aleppo nerve-center. Inside, he discovered a notebook documenting her father Ghassan’s work with extremist elements, as a result of his position as military trainer for Islamic Sawfa Brigade.

During that period, he worked in the Shariah Council in the Aleppo state Eye Hospital, which was under the control of al-Nusra. The notebook indicated the Council passed decisions on imprisonment and assassination of captured civilians to the terorrist group.

Since-deleted social media posts reveal Bana’s grandfather Mohammed was an arms dealer and had a weapons maintenance shop in Sha’ar, at which he serviced killing apparatuses for terrorist factions, situated opposite a school-turned-base for al-Nusra.

Bana’s Twitter account frequently complained of her inability to go ‘back to school’ – in a perverse irony, Iskef found al-Nusra used a former school near her home as a headquarters. 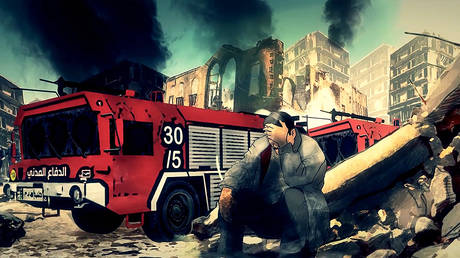