67-year-old Paul Rusesabagina has been convicted by a Rwandan court of being part of the MRCD-FLN “terror group,” which killed nine civilians in an a 2018 attack, backing the group while he was in exile.

Announcing the guilty verdict, Judge Beatrice Mukamurenzi declared that Rusesabagina and the other 19 defendants should “be found guilty” over their involvement with the group that “attacked people in their homes” and “even in their cars on the road.”

Rusesabagina and his family have rejected the case and the trial as unfair, arguing that he was kidnapped by Rwanda authorities after being tricked into flying to the country, believing he was, instead, on a flight to Burundi. Addressing the 2018 attacks, Rusesabagina claims he never endorsed violence against civilians.

Rusesabagina was portrayed by Don Cheadle in the 2004 film Hotel Rwanda, which depicted him as the hero hotel manager who helped to save more than 1,000 Tutsi and Hutu refugees during the country’s deadly genocide.

The conflict, between April 7- July 15 1994, saw around 800,000 Tutsi citizens killed in what’s been called the Rwandan genocide. The post-genocide government, led by President Paula Kagame, has been criticized by Rusesabagina, who accused the leader of silencing opposition, engaging in authoritarianism and promoting anti-Hutu rhetoric.

Around the same time as the 2018 MRCD-FLN attack, Rusesabagina publicly called for regime change in the country, declaring that “the time has come for us to use any means possible to bring about change in Rwanda.”

Prosecutors are seeking a life sentence for the defendants on nine charges, including arson, hostage taking, terrorism and forming an armed rebel group directed from abroad. 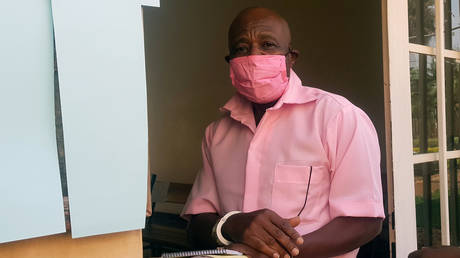