Montreal police found no hostage-takers at the offices of video game company Ubisoft, Canadian media have reported. Police spent more than two hours securing and clearing the building after a 911 call.

While dozens of Montreal Police (SPVM) officers were still blocking Saint-Laurent Boulevard on Friday afternoon, and no official explanation was on offer, multiple media outlets cited police sources to claim the hours-long siege was a “hoax” or a “prank” and that everyone has been evacuated safely.

This included some 50 or so people who had sought refuge on the building’s roof, barricading the door of the stairwell below as a tactical police team moved in to secure the building. No injuries were reported in the standoff.

Ubisoft Montreal normally employs almost 4,000 people, but most of them are currently working from home due to the Covid-19 pandemic.

The company was founded in 1997 as the Canadian subsidiary of the French video game giant. Ubisoft Montreal is behind such popular titles as ‘Prince of Persia: The Sands of Time’, the ‘Assassin’s Creed’ series, ‘Far Cry’, and ‘Watch Dogs.’

Ubisoft has faced online backlash this past week over “ableist language” in ‘Assassin’s Creed: Valhalla.’ Some game journalists have speculated the fake 911 call may have been a case of “swatting” – a notorious and deadly practice by vindictive video-gamers, which has led to fatal police shootings in the past.

Sounding like the Ubisoft Montreal situation was “just” a swatting. Swear to god, this industry sometimes…

Hope everybody at ubi recovers from these events in time 💙

(And I hope everyone who decided to crack jokes about it falls down a manhole to the center of the earth.) 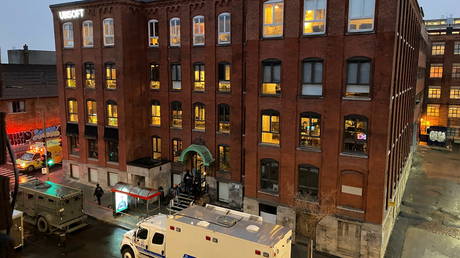 Ministers to order shake-up of uni...