A man holding a Hong Kong independence flag became the first person to be detained under a new law introduced by China. As protests over the legislation gain foreign support, Beijing said other nations should stop interfering.

Hong Kong Police tweeted that the man was arrested for holding the independence flag in Causeway Bay, “violating #NationalSecurityLaw,” and added that it was the first arrest made since the law has come into force.

#BREAKING: A man was arrested for holding a #HKIndependence flag in #CausewayBay, Hong Kong, violating the #NationalSecurityLaw. This is the first arrest made since the law has come into force. pic.twitter.com/C0ezm3SGDm

The national security law came into effect last night, after it was introduced by China’s government in late May. It has been endorsed by Hong Kong leader Carrie Lam, who said it is “necessary and timely” to maintain stability in the semi-autonomous territory, which has seen regular protests since March 2019, following the introduction of an extradition bill, and has since evolved into anti-government demonstrations.

Under the new rules, those found guilty of crimes of secession, subversion, terrorism, and collusion with foreign forces may face life in prison. Protesters and several countries have opposed the bill, saying it threatens Hong Kong’s status under the ‘one country, two systems’ arrangement with China that has been in place since 1997, when Britain handed over administration to Beijing.

Thousands of protesters attended a rally downtown on Wednesday, the anniversary of Britain’s handover, where police fired water cannons and pepper spray on the crowd. Police also said they subsequently arrested dozens of people for unlawful assembly, violating the security law, obstructing police, and possessing weapons.

Hong Kong Police tweeted a photograph of a large purple “warning” flag being held up at the protest, which told demonstrators that they may be in breach of the new law for chanting slogans.

The protests are heavily backed by the West and, following criticism of the new law by the US, UK, and others, China has urged other countries to stay out of its affairs. Foreign Ministry spokesman Zhao Lijian said on Wednesday that Beijing will not allow foreign interference in its domestic affairs. 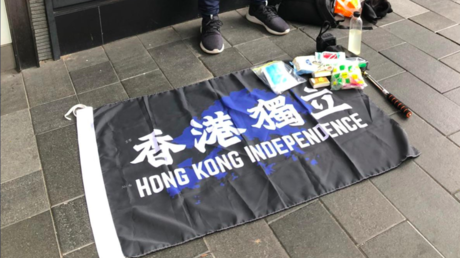 Beaver invasion in the Arctic is M...