Opposition legislators announced they are giving up their seats in Hong Kong’s parliament after the city’s government ousted four of their colleagues. Hong Kong’s chief executive argued the move was in line with city laws.

“Today, we announce we will resign from our positions as our colleagues are being disqualified by the central government’s ruthless move,” Democratic Party leader Wu Chi-wai said.

Fifteen opposition MPs decided to give up their seats in protest after Beijing authorized the Hong Kong government to expel elected legislators from the city’s parliament without having to go through the courts. Wu blasted the move as “ridiculous” and illegal under Hong Kong law.

“All the power will be centralized in the [Hong Kong] chief executive – a puppet of the central government. So today is the end of ‘one country, two systems,’” Wu said, referring to the scheme under which the city retains a degree of political autonomy within China.

On Wednesday, China’s top legislature in Beijing adopted a resolution authorizing Hong Kong to unseat the MPs deemed disloyal. According to Chinese media, the grounds for disqualification include support for “Hong Kong independence” from China, threatening national security, and inviting foreign meddling into the city’s affairs.

The document allowed for the immediate expulsion of four MPs from the Legislative Council of Hong Kong. They were previously banned in July from running in the election that was first scheduled for September 2020 but was later postponed until September 2021 due to what the Hong Kong government said were concerns over Covid-19.

The top official in the Chinese parliament in Beijing, Li Zhanshu, defended the measures against Hong Kong MPs as “necessary” and “appropriate,” arguing that the move will safeguard the country’s sovereignty and security. In a similar tone, Beijing’s agency responsible for Hong Kong affairs said that patriotism and civic loyalty are essential to the “political ethic” of local officials.

The disqualified lawmakers slammed their ouster as an “obvious breach” of local laws and a violation of their right to hold public office. “If observing due process and fighting for democracy can lead to being disqualified, it will be my honor,” former MP Dennis Kwok said.

The head of the Hong Kong government, Carrie Lam, meanwhile, said that Beijing’s actions were in line with the city’s laws. She denied that the city will end up with a “rubber-stamp” legislature after the resignation of opposition MPs.

“Each member of the Legislative Council has to account for actions to the constituencies [and] their voters. And there are many occasions even among the so-called pro-establishment members that our proposals did not get through,” Lam told reporters.

Hong Kong has seen massive protests against Beijing’s authority and for broader political reform that intensified last summer. Some of the rallies were also coupled with intense rioting and fierce street battles with police. Beijing has repeatedly argued that the unrest and violence was incited from abroad. 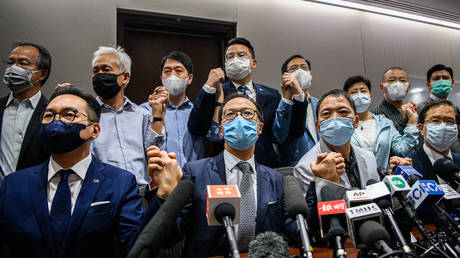