More than 160 police officers in Germany have carried out searches at the homes of some of their colleagues after nine cops were accused of participating in right-wing and extremist WhatsApp groups.

Raids on several apartments belonging to police officers took place early on Tuesday morning in the state of North Rhine-Westphalia in western Germany.

Some 17 electronic items were confiscated by police during the raids. Files, including videos, audio messages and photos, have been taken away for further investigation by the Duisburg public prosecutor’s office.

According to German newspaper Bild, the suspects are aged between 29 and 69 and are said to be a group of police officers from Mulheim and Essen who bowled together.

Herbert Reul, interior minister for the state of North Rhine-Westphalia, said that the raids were “the result of the systematic evaluation of two cellphones” from earlier investigations.

The allegations against the officers are the latest in a series of high-profile scandals to hit the German police.

One group chat from 2015 contained 126 indecent images, including photos of Nazi leader Adolf Hitler, illustrations of a refugee in a gas chamber, and black people being shot. 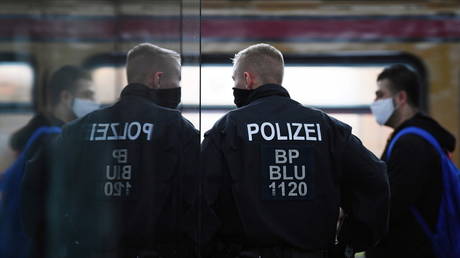