Veteran human rights activist Ayaan Hirsi Ali has opened herself up to some major online backlash after daring to defend author JK Rowling for “standing her ground” and sticking to her position on transgender issues.

“She is not transphobic and neither am I,” Hirsi Ali insisted in a Wednesday tweet, calling Rowling a “hero of our times” who is fighting to “protect the hard-won rights of women.”

I praise J.K. Rowling for standing her ground.
She is a hero of our times. She is not transphobic and neither am I. This fight to preserve the free exchange of ideas is worth having; to protect the hard-won rights of women but also to uphold the principles of our free society.

Rowling has been the subject of fierce criticism in recent weeks for expressing the view that trans-identifying children are “being shunted towards” taking hormones and having life-altering surgeries when it may not be necessary. She has also come under fire for suggesting trans activists are “erasing the concept of sex.”

The Somali-born Hirsi Ali had expanded on her thoughts on the issue in an article published in the Washington Examiner at the end of June. In the piece, she defended the controversial Harry Potter author for “engaging in an act of heterodox thinking” and “refusing to be intimidated by the Twitter mob.”

She praised Rowling for “fighting against the erosion of women’s rights” and “warning of the real-life consequences when women’s rights are subordinated to transgender rights.”

Hirsi Ali’s latest declaration of support for Rowling sparked outrage online, with many commenters immediately branding her ‘transphobic’. One accused the activist, who suffered female genital mutilation as a child and fled to the Netherlands years later, of having a “ludicrous sense of entitlement.” Another questioned her bravery because she was praising a “rich white lady.”

It takes such a ludicrous sense of entitlement for a cis person who has never experienced transphobia in their life to say they they have a better understanding of what transphobia is and isn’t than a trans person who experiences it every waking moment of their life????

While the backlash was swift, there were a few other commenters who thanked Hirsi Ali for publicly backing Rowing.

In her own tweet on Wednesday, Rowling also thanked the activist for speaking up, claiming that many people with public platforms privately say they agree with her, “but are too scared to stand up.”

Thank you from the bottom of my heart, @Ayaan. If all the people with public platforms who’re messaging me to say they agree with us but are too scared to stand up found their bravery, we’d have an army. https://t.co/b4PZSXmYpp

Rowling appears to be on a roll in terms of attracting controversies of late. On Tuesday, she made headlines again after signing an open letter condemning “cancel culture” alongside Noam Chomsky and other activists. The move was lauded largely by conservative crowds online and mocked by many on the left. 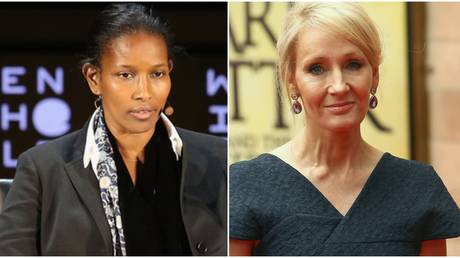