The Al-Qassam Brigades, the military wing of Hamas, has said it fired 15 rockets towards the Israeli town of Dimona, near the country’s main nuclear reactor, after Israel pledged a tough response against Palestinian militants.

The group announced its latest rocket attack from Gaza towards Israel in a statement on Wednesday, adding that another 50 rockets had been fired towards the city of Ashdod.

Unverified footage posted to social media purported to show the rockets being fired towards Dimona. No injuries have been reported.

On Wednesday, rocket warning sirens sounded in Dimona, Ashdod, and other Israeli areas, including Ashkelon, Yavne, and Beersheba, according to the Times of Israel.

The Israel Defense Forces (IDF) said “a barrage of rockets” had been fired from Gaza into southern Israel on Wednesday afternoon, having earlier reported that more than 1,050 were launched in the past 38 hours alone.

The airstrikes are the latest outbursts of violence amid a serious escalation between Israeli forces and Palestinian Hamas militants this week.

Israeli Defense Minister Benny Gantz said on Wednesday that the IDF would continue its air strikes on alleged Hamas targets in Gaza until there is “complete silence.”

According to the Palestinian Health Ministry, 53 people have died from the attacks in Gaza this week, including 14 children, while 320 people have been injured.

Meanwhile, six people are reported to have been killed in Israel. 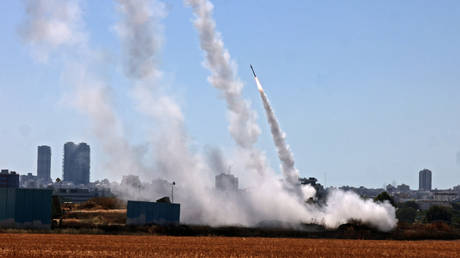