Halle Berry forced to apologize after going for the ‘Oscar bait’ with transgender role, misgendering character

Halle Berry forced to apologize after going for the ‘Oscar bait’ with transgender role, misgendering character

Oscar-winning actress Halle Berry has been forced to issue a Twitter apology amid ferocious backlash after she revealed should was considering an upcoming film role as a transgender man.

In a Friday Instagram Live interview with hair stylist Christin Brown, in which the pair discussed whether Berry would ever wear her hair short again, the Oscar-winner revealed she might do so for one particular role.

“I’m thinking of a character where this woman is transgender,” Berry said. “She’s a woman that transitioned into a man.”

However, the 53-year-old actress neglected to use the correct pronouns when discussing the role, which irked the trans activist community even more.

please reconsider @halleberry. trans men aren’t women playing dress up, and this would do a lot more harm than good. https://t.co/FH2nVP38ud

“This is why cis people can’t take trans roles – too many confuse our actual identities with their Oscar bait. I look forward to her apology and dropping of this part,” wrote one upset Twitter user.

It absolutely is NOT a female story, it is a story about a man. And why is the aspect of physical transition the focal point for her? Cis peoples’ understanding of trans issues is really myopic. Girl watch Disclosure on Netflix.

On Monday evening, Berry issued a public apology and vowed to be an ally of the transgender community.

“As a cisgender woman, I now understand that I should not have considered this role, and that the transgender community should undeniably have the opportunity to tell their own stories.”

“I vow to be an ally infusing my voice to promote better representation on-screen, both in front of and behind the camera.”

The Gay & Lesbian Alliance Against Defamation welcomed Berry’s climbdown from the role and her apology.

We are pleased that @halleberry listened to the concerns of transgender people and learned from them. Other powerful people should do the same. A good place to start is by watching @Disclosure_Doc to learn about trans representation in media. https://t.co/SAxSvXxbk3

The Academy Award-winner said the role of the transgender man was pitched to her while she was working on her upcoming film, ‘Bruised’, which is set to premiere at the Toronto Film Festival in September.

But the severe backlash and heavy criticism of her both for considering the role and for misgendering the character she might have played proved too much, with many people asking Berry to watch the documentary film ‘Disclosure’ to educate herself on trans issues, with the filmmakers themselves even tweeting to thank the actress for stepping down from the role.

Thank you @halleberry for listening and learning. We hope #DisclosureNetflix is one of many educational tools you and others can rely to inspire and strengthen allyship. https://t.co/SA71QFsgAN

A similar fate befell actress Scarlett Johansson in 2018, when she considered playing a transgender character in the film ‘Rub and Tug’ but opted not to after backlash from trans activists and the LGBT community. 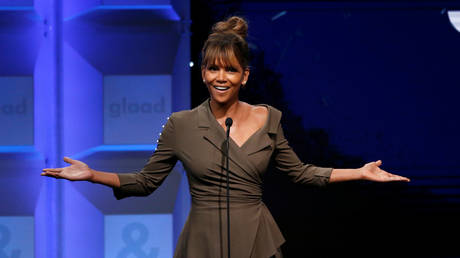