Haitian Prime Minister Ariel Henry fired his justice minister hours after dismissing the country’s chief prosecutor, who had tried to charge the leader over his alleged involvement in the late president’s assassination.

Henry removed Justice Minister Rockefeller Vincent from his post late on Wednesday night, handing control of the department to Interior Minister Liszt Quitel, who will now hold both cabinet positions.

Following his removal, Vincent tweeted that “Haiti has the obligation to render justice to its villainously murdered president,” declaring that it is a “question of national dignity.” He did not accuse the prime minister directly of any complicity in the assassination of Jovenel Moise.

The government shake-up came less than 24 hours after Haiti’s chief prosecutor, Bed-Ford Claude, was sacked by the prime minister after Claude asked a judge to charge the political leader over his alleged role in the assassination of the country’s president. Henry said Claude was fired over an “administrative error,” rather than the murder investigation.

Last week, Claude had asked the PM meet with him to discuss a call Henry allegedly made to a key suspect in the murder case, Joseph Badio, hours after gunmen killed President Moise at his home. Henry rejected the request, claiming it was politically motivated.

Alongside the removal of the justice minister and chief prosecutor, the secretary-general of Haiti’s Council of Ministers, Renald Luberice, has resigned, claiming that he cannot serve in a government with a prime minister who “does not intend to cooperate with justice, seeking, on the contrary, by all means, to obstruct it.”

So far, more than 40 people, including 18 former Colombian soldiers, have been detained in connection with the assassination. Badio is still at large. 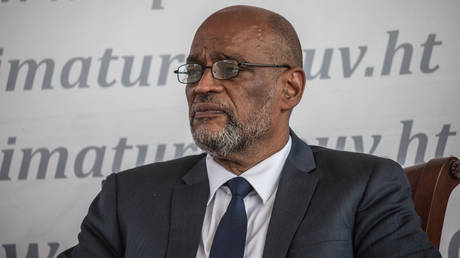