A Croatian policeman stationed outside a government building in Zagreb was shot and wounded by a gunman. The suspect later killed himself, according to law enforcement officials.

An unidentified gunman opened fire at St. Mark’s Square in the Croatian capital on Monday morning using an automatic weapon, wounding a policeman who was part of a government security detail, according to local media reports.

Video published by a Croatian news channel shows emergency workers rushing to the officer’s aid and placing him in an ambulance on a stretcher. A small pool of blood can be seen on the pavement where he was shot.

Police immediately launched a manhunt for the suspect, with helicopters scouring the area. A man matching the description of the shooter was later found dead by suicide, officials said.

The officer was taken to the hospital. Local media reported that he had been hit in the left arm and both sides of his torso but was in stable condition.

In response to the shooting, Croatia’s parliament has canceled all meetings. Prime Minister Andrej Plenkovic was not in the building during the time of the attack but arrived at the scene later. In a statement, he said that Croatia has a “culture of openness” and that the shooting could prompt the government to “rethink” how it handles security.

Officials have launched an investigation in the hope of establishing a motive and understanding the circumstances surrounding the incident. 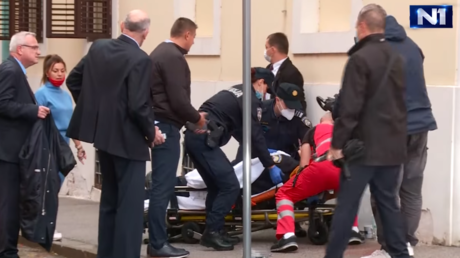