A hotel has been attacked by unknown gunmen in the Somalian capital Mogadishu, reports suggest. Video posted on social media shows a large plume of smoke emerging from the scene that apparently suffered the explosion.

Reports of the attack emerged on local media on Sunday. Several videos circulating online show dust and smoke emerging from the location, identified as Mogadishu’s Elite Hotel, while gunfire can be heard in the background.

A VBIED was detonated in front of the popular Hotel known as “Hotel Elite” at Liido beach in Mogadishu. Following the explosion, armed gunmen stormed the building and there is currently a gunfight under way inside the hotel. I’ll update as details come in. pic.twitter.com/S49CXtbJvA

The videos were filmed at a distance from the hotel, making it difficult to tell what exactly happened there.

Local media outlets reported that a powerful explosion went off at the hotel before it was stormed by gunmen. Some pinned the blame on Al-Shabaab – a hard-line Islamist militant group, that has ties to Al-Qaeda.

PHOTO: Outside the Elite Hotel in Liido beach #Mogadishu where an active attack still continues.
Rampaged shooting still reported with gunmen inside the hotel.
Aamin Ambulance says 28 injured persons were taken to the hospital. Number of deaths yet to be confirmed. #Somalia pic.twitter.com/2VQx8WZqV9

At least 28 people were injured during the attack, local media reported citing the ambulance service. An unspecified number of people are feared dead.

No official information about casualties or damage has been made available so far. 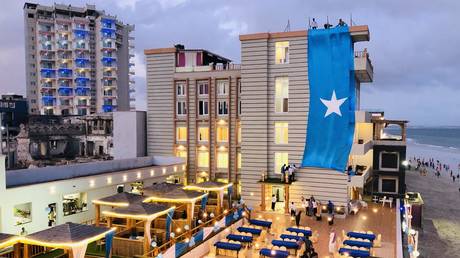 SEA of people flows through Minsk...