The Guatemalan government has vowed to catch and expel US-bound migrants who entered the country illegally from Honduras, citing fears over the spread of coronavirus. Some 3,000 people have already crossed the Guatemalan border.

The influx of migrants poses a serious health threat amid the ongoing pandemic, Guatemalan President Alejandro Giammattei said while promising to push the group back.

“The order has been given to detain all those who entered illegally, and return them to the border of their country,” Giammattei said in a televised speech.

We will not allow any foreigner who has used illegal means to enter the country, to think that they have the right to come and infect us and put us at serious risk.

Around 3,000 people entered the country on Thursday, with many of them simply pushing their way through border crossing points. The migrants rushed deeper into Guatemala afterwards, with many boarding passing traffic to move faster. At least one migrant was killed as he attempted to climb onto a moving truck, graphic imagery circulating online shows.

Large groups of migrants were spotted sleeping in the streets of Guatemalan towns overnight, with local police keeping a close eye on them.

Guatemalan authorities said earlier that some 3,000 more migrants were expected to reach the country’s borders on Friday. Guatemalan director of migration, Guillermo Diaz, has called upon Honduran authorities to ramp up border security in the neighboring state and assist his country in containing the migrant flow.

The ongoing migrant caravan is the largest since the coronavirus pandemic reached Central America back in March. The pandemic has severely affected international travel in the region, including for illegal migrants, as well as elsewhere across the globe. 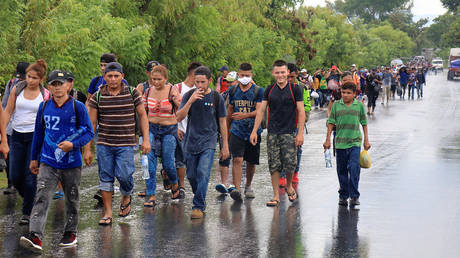