Swedish environmentalist Greta Thunberg has resumed her studies, a year after the 17-year-old left school to pursue her globetrotting climate change activism.

In a tweet, the climate campaigner expressed joy at returning to normal teenager activities.

“My gap year from school is over, and it feels so great to finally be back in school again!” Thunberg wrote, attaching a smiling photo of herself with a backpack.

My gap year from school is over, and it feels so great to finally be back in school again! pic.twitter.com/EKDzzOnwaI

Her escapades led to numerous meetings with high-profile leaders and figures, including an audience with former US President Barack Obama. However, she was famously snubbed by the current president, who ignored the teen when she made an appearance at the UN General Assembly in New York City in September 2019. Trump later joked that Thunberg, who often uses apocalyptic language to describe the alleged devastation that will result from a warming globe, was “a very happy young girl looking forward to a bright and wonderful future.”

Most notably, she caused mass pandemonium on social media after exclaiming “how dare you!” to world leaders during a UN climate summit. Praised by many for her indignation, the utterance nonetheless spawned a flood of memes and other forms of internet snark.

Her activism, which once grabbed weekly headlines, became less discussed following the outbreak of the coronavirus pandemic, as well as the social unrest resulting from Black Lives Matter protests. The climate activist icon said in June that the anti-racism demonstrations, many of which have descended into violence, as well as the unprecedented government action in response to Covid-19, illustrate the “necessary force” needed to overcome critical issues.

Although hailed by many environmentalists as a role model, her fame has also made her the object of considerable criticism and mockery. Last week a pair of Russian pranksters released an audio recording suggesting that Democrat vice presidential nominee Kamala Harris was eager to accept fictitious ‘kompromat’ on Donald Trump, believing the caller was Thunberg. 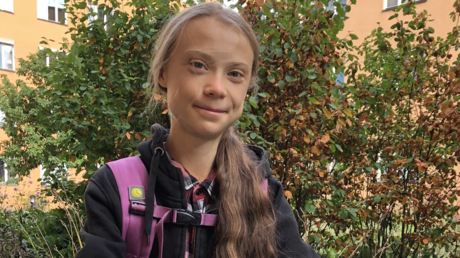