Greece’s Prime Minister Kyriakos Mitsotakis has fired the country’s minister for public order as part of a cabinet reshuffle in response to criticism over the government’s handling of a series of wildfires during the summer.

The decision to remove Minister for Public Order and Citizen Protection Michalis Chrysochoidis from his post comes after rampant wildfires destroyed over a quarter of a million hectares of pine forest in August, damaging homes and businesses, threatening Athens and claiming the lives of two people.

Chrysochoidis will be replaced by former interior minister Takis Theodorikakos, while the country’s health minister, Vassilis Kikilias, is being moved to the tourism post, replacing Harry Theoharis.

The cabinet reshuffle follows a public apology from the prime minister over delays and breakdowns in communication that hampered the country’s official response to the devastating wildfires, with Mitsotakis pleading to make amends to prevent another such catastrophe.

Alongside the changes in the cabinet, a spokesperson for the prime minister’s office said that a new civil protection ministry will be created, with former defense minister Evangelos Apostolakis leading this department. The new ministry will work alongside a natural disaster recovery ministry, established by the government in mid-August.

The Greek government reshuffle comes two weeks ahead of a speech by Mitsotakis, in which he is expected to unveil his 2022 economic policy, as the country rebounds from the impact on the country’s tourism sector of the Covid pandemic and the recent wildfires.

This summer, more than 500 wildfires broke out across Greece over a series of weeks, with other countries, such as France, Italy and Turkey similarly impacted, as scorching temperatures, a dry climate and high winds fueled their spread in the Mediterranean. 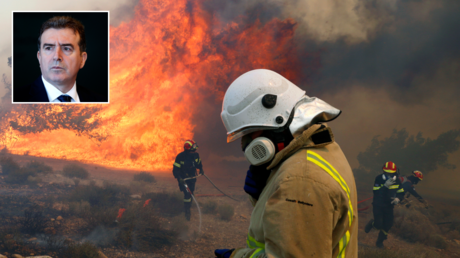