In a landmark court ruling, Greece’s far-right Golden Dawn party has been found to be operating as a criminal organization. The five-year trial had 68 defendants and included the murder of a rapper and cases of violent attacks.

Protesters held banners comparing the political party, which is controversial for its fiercely anti-immigrant views, to Nazis as they stood outside the Athens courthouse. Videos show the massive crowd filling the main roadway and side streets surrounding the building.  Fights broke out in the crowd, with police using tear gas and a water cannon to restore order.

Footage shows people gathering in large numbers outside the Supreme Civil and Criminal Court in #Athens on Wednesday, as judges were due to deliver the long-awaited verdicts in the #GoldenDawn trial.

Thousands who gathered outside Athens courthouse for Golden Dawn ruling disperse after police use tear gas and water cannon on the protesters. pic.twitter.com/dEevfTlNk2

In its decision, the court ruled that seven of the party’s former lawmakers, including party leader Michaloliakos, were guilty of running a criminal organization. In total, 68 defendants were involved in the case, including 18 former parliamentarians.

The trial considered four separate criminal charges involving the murder of Greek rapper Pavlos Fyssas in 2013, attacks on migrant fishermen, attacks on left-wing activists and whether Golden Dawn was involved in criminal activity.

The trial began in 2015, after a supporter of Golden Dawn was accused of murdering Fyssas, who was known for his anti-fascist views. As a result, Michaloliakos and more than a dozen party members were arrested and charged with participating in a criminal enterprise. Golden Dawn claims that the trial is a political witch-hunt.

At its peak, Golden Dawn was Greece’s third-most popular party as voters looked for radical change during the nation’s crippling financial crisis. The far-right party lost its remaining seats in parliament in last year’s elections. 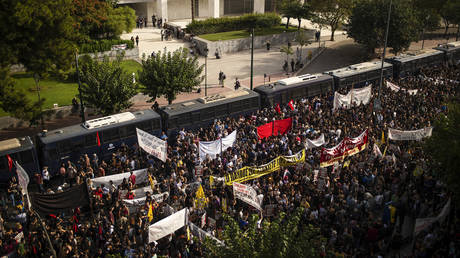