Athens has called on Ankara to step back from reopening a beach resort in Northern Cyprus, which had been abandoned since the 1974 conflict on the island, and said the issue could be brought before EU leaders next week.

Northern Cyprus recently reopened part of the fenced-off town of Varosha in Famagusta, allowing public access for the first time in 46 years.

Greece considers the move “incongruous with a decision at a European leaders meeting last week,” government spokesman Stelios Petsas said in Athens on Thursday. “Turkey has to take a step back,” Petsas added, warning that Greece and Cyprus could bring the issue before an EU summit scheduled for October 15-16.

A 2.5km area of North Cypriot coastline has been opened for Varosha visitors until 5pm every day, although they must pass through a military station.

It’s not clear, however, if Greek Cypriots will be granted access. The island has been split since the 1974 conflict. Varosha’s population of 39,000 people fled during a Turkish invasion triggered by a coup engineered by the military ruling Greece at the time.

Athens recently supported Cyprus in seeking EU sanctions on Turkey for searching for oil and gas in the Eastern Mediterranean.

Greek PM Kyriakos Mitsotakis discussed the Varosha reopening with European Commission President Ursula von der Leyen on Thursday. In a joint statement, the two said Turkey has to undertake steps to reduce tensions in the region, and to engage in dialogue with Greece, Cyprus and the EU.

Cyprus President Nicos Anastasiades condemned the coastline reopening as “an illegal act” which violates international law and UN Security Council resolutions 550 and 789. “The Republic of Cyprus… will not remain inactive,” he said on Thursday, adding that the “violations” have already been reported to the UN Security Council. 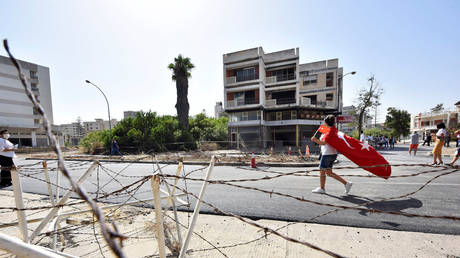