Close
Trending News
HomeWorldGreece may talk to Turkey, but not under ‘military pressure’, Athens says as rival drills begin in Eastern Mediterranean

Greece may talk to Turkey, but not under ‘military pressure’, Athens says as rival drills begin in Eastern Mediterranean

Greece may talk to Turkey, but not under ‘military pressure’, Athens says as rival drills begin in Eastern Mediterranean

Athens said it will leave the door open for dialogue with Ankara but will not be pressured, issuing the remarks after a dispute over Mediterranean oil and gas stepped up between the NATO allies.

Greece will not engage in “any discussions” with its rival Turkey as long as it keeps up piling on “military pressure” in the Aegean and Eastern Mediterranean, Greek Minister of State Giorgos Gerapetritis said on Tuesday. “The only issue Greece will discuss is the continental shelf and the exclusive economic zone,” the top official proclaimed.

Greece, which appears to have secured the backing of Germany, has in the meantime staged a naval exercise along with the US. The war games which took place south of Crete featured a Greek frigate and submarine, as well as six F-16 fighter jets and the destroyer the USS Winston S. Churchill. Turkey has also announced holding naval drills this Monday, taking an apparent swipe at Greece.

Turkey and Greece – both NATO allies for decades – have locked horns over the discovery of oil and gas deposits off the shores of Crete and Cyprus in contentious waters. Ankara, which deployed its research vessel the Oruc Reis, announced this Monday that its activities in the disputed area will be extended until August 27, raising ire in Athens.

Turkish President Recep Tayyip Erdogan warned that his country “will not take even the smallest step back from the activities of either the Oruc Reis or our naval elements escorting it.” He suggested Greece had “thrown itself into a chaos from which it cannot find a way out.” 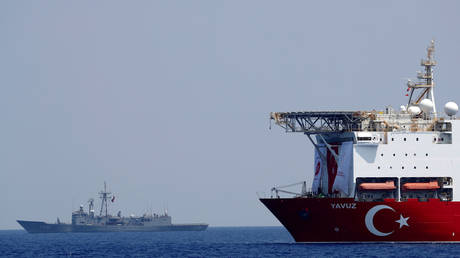