Greece has slammed Turkey’s decision to convert the iconic Hagia Sophia back into a mosque as “petty” and urged the European Union to take a tougher stance on Ankara’s plans to drill for gas in contested Mediterranean waters.

Turkey’s move to turn the museum into an active mosque has clearly shown it is “opting to sever links with [the] Western world and its values,” Greek PM Kyriakos Mitsotakis said Tuesday. Mitsotakis slammed Ankara’s decision as an “unnecessary, petty initiative” and said Greece was considering its response “at all levels.”

The Greek leader also called on Brussels to take strong action against Turkey’s “troublemaking” in the region, pointing specifically to its plans to drill for gas in disputed Mediterranean waters.

Europe should once and for all draft a specific list of actions, and sanctions against a country which seeks to be a regional troublemaker, and which is evolving into a threat to the stability of the whole south-east Mediterranean region.

Last week, a Turkish court ruled that a 1934 decree which converted the Hagia Sophia into a museum was unlawful. Immediately after the ruling, President Recep Tayyip Erdogan, who has been a strong proponent of turning it into a mosque, signed a new decree greenlighting the move and said that prayers would begin there in two weeks.

The cathedral was converted into a mosque back in the 15th century, after the Ottomans conquered Constantinople in 1453. After the Ottoman Empire crumbled in the early 20th century, the new Turkey shifted toward secularism and the building was turned into a museum.

Ankara’s decision sparked an overwhelmingly negative reaction in the Christian world, with many, including Pope Francis, condemning the move. The conversion has especially angered Orthodox Christians, who revere the 6th century building as a focal point of their faith.

The EU urged Turkey to reverse its decision, with the bloc’s top diplomat Josep Borrell warning it “will inevitably fuel mistrust, provoke renewed division between religious communities and undermine our efforts at dialog and cooperation.”

Facing the mounting international pressure, Turkey insisted the decision will not be rolled back. Erdogan offered reassurances, however, that non-Muslims would still be able to access the historic site “like all of our other mosques.” 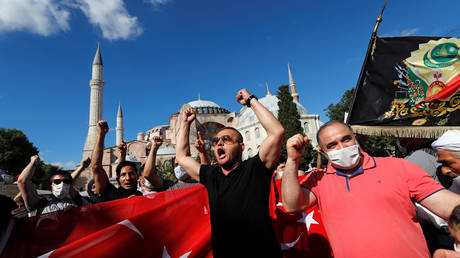 Scientists zoom in on ‘ghost galax...