If the world wasn’t already scary enough, Google has decided to bring dinosaurs into the mix. The tech giant’s latest search update includes augmented reality prehistoric monsters, but where are the feathers?

Google is expanding the augmented reality (AR) roster of creatures available in Google Search, allowing users to now bring dinosaurs directly into their homes via their mobile phones.

From Tuesday onward, 10 of the world’s most-loved dinosaurs can be brought (back) to life, so to speak.

The list of dinos which made the cut include the king of all dinosaurs, Tyrannosaurus rex, as well as firm favorites such as the velociraptor, triceratops, spinosaurus, and the prickly stegosaurus.

Available since last year, the AR feature has grown to encompass all manner of educational items from animals to cells to NASA models.

The depiction of dinosaurs in popular culture has been frequently met with ire from the scientific community. Upon the release of Jurassic World in 2015, paleontologists announced their disappointment in how the protagonists of their field were depicted on screen. Featherless and scaled, some commentators stated that the film was a “major step backward for accuracy.”

With Google’s AR dinos, the reason why the models are reminiscent of those popularized by the Jurassic Park series — and not covered in feathers as they are believed to have been — is because they are the result of a partnership with Universal, the studio behind the Jurassic franchise.

Also involved in the partnership is games developer Ludia, which is behind the Jurassic World Alive AR game — the source of the 10 dinosaur renderings.

To resurrect the classic dinos, all users need to do is search with their phone’s browser for one of the named species on Google, scroll down and tap on the ‘view in 3D’ option.

This will bring the dinosaur into your surroundings, where it can be placed within a photo or even within a video recording. Although stationary, the dinosaur is animated to act like the real deal, acting like the living breathing, roaring monsters seen in the film series.

This isn’t the only recent example of dinosaur-related AR news. In June, the UK’s Royal Mint released the Dinosauria Collection, a selection of 50p coins dedicated to dinosaurs that have the added feature of augmented reality — the first time AR has been used on a coin. 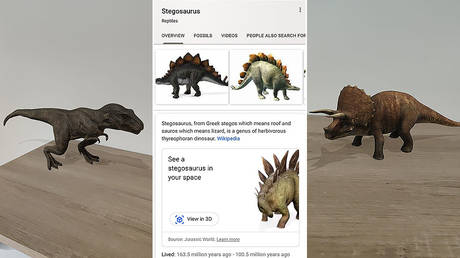