Israel has ordered US-based evangelical GOD TV off air, accusing the obviously religious broadcaster of concealing its missionary agenda which allegedly targeted the Jewish population of the country.

The seven-year broadcasting contract secured by GOD TV and Israel’s main cable provider earlier this year proved to be very short-lived. The broadcaster’s Israeli subsidiary, Shelanu TV, was taken off air after a review by the Cable and Satellite Broadcasting Council, the regulator’s chairman Asher Biton announced. The channel must now stop broadcasting in Israel within seven days.

The channel’s license agreement stated “explicitly that the channel is intended for the Christian population,” Biton explained, yet Shelanu TV was also allowed to “integrate several programs with content designated for Israel.” After the oversight, however, the council concluded that the channel was not appealing to the Christian population in Israel but rather specifically to Jews, and that thus “the characterization of the channel that was submitted does not reflect its broadcasts.”

The decision to silence the evangelical channel was welcomed by some Israeli hard-liners. International spokesperson for the Jewish community of Hebron and NYT contributor Yishai Fleisher, for instance, hailed the regulator’s move, proclaiming that “Israel is Jewish” altogether and apparently ‘forgetting’ about non-Jewish citizens of the country.

“The license of Shelanu TV, the Hebrew-language Christian missionary TV channel owned by @GODTV – which has been accused of seeking to proselytise in Israel – has been suspended”
ISRAEL IS JEWISH!https://t.co/hLnXFkc65M

Shelanu TV called the affair purely political as the license explicitly allowed it to broadcast in Hebrew to the Israeli public.

At the same time, a now-deleted video message from GOD TV CEO Ward Simpson suggested the channel was actually seeking to preach among the Jews.

“God has supernaturally opened the door for us to take the Gospel of Jesus into the homes and lives and hearts of his Jewish people,” Simpson said in the video. The message was promptly taken down and the CEO apologized to anyone who found such remarks offensive and promised to stick to the license terms.

Despite the ban, the channel will reapply for its license, Shelanu TV’s spokesman Ron Cantor said, implying that refusal to grant it broadcasting rights again might leave a huge dent in the US-Israel relationship. The channel hopes the regulator will approve the request “and thus avoid a severe diplomatic incident with hundreds of millions of pro-Israel evangelical Christians worldwide,” he said. The Florida-based GOD TV network claims to reach some 300 million households around the globe.

Evangelical Christians have been one of the most prominent supporters of Israel in the United States, advocating strong friendship with Tel Aviv for decades. The relationship between the two countries has become particularly cozy under the Trump administration, and it’s unclear if this hostile move will face a strong backlash from evangelists. 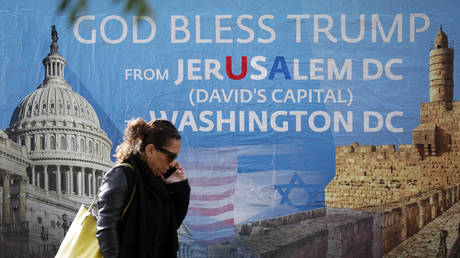