Goat to be kidding: WATCH daring animal rescue in India

Goat to be kidding: WATCH daring animal rescue in India

A video of the daring rescue of a goat from a deep pit in India, requiring a great deal of teamwork and a bit of acrobatics, has gone viral. Viewers were amazed by the bravery of one of the men.

Footage of the incident, shared online by Hardi Singh, a police chief in the State of Assam, shows an impromptu rescue team trying to reach for an animal stuck inside a narrow hole in the middle of a field. It turned out to be too deep, and one young local volunteered to be lowered into the pit.

Two others held the rescuer by his legs, as he tried to grab and ultimately pull the goat out. The animal was apparently not very pleased with its experience, and dashed into a field right after the rescue.

The exact purpose of the hole remains a mystery, but the video shows other similar openings nearby, suggesting they may have been dug for fence posts. Singh called upon the authorities to locate the holes and get them covered to avoid similar mishaps in future. 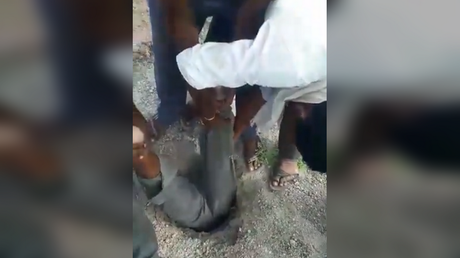 It’s not about Trump: Berlin says...