Despite dropping from the headlines, Covid-19 continues to spread unabated throughout much of the world. After recording more than 183,000 new cases in a single day, global infections surged past nine million.

Sunday’s crop of 183,000 new cases was the single worst daily figure since the outbreak began, World Health Organization chief Tedros Adhanom Ghebreyesus said on Monday. The surge, driven by new infections in Brazil and India, as well as an uptick in the United States and China, brought the total number of infections worldwide to over nine million. More than 471,000 people to date have died as a result of the virus.

The US still leads the world in coronavirus infections and deaths, with Brazil coming in second. Russia, India and the UK round out the top five in terms of confirmed cases. Fears of a ‘second wave’ of cases have been substantiated by fresh outbreaks in China and South Korea, two countries that managed to suppress the spread of the virus early.

Tedros called for a global push to produce and develop dexamethasone, a steroid medicine that British researchers said last week can reduce deaths among the most severe Covid-19 patients by a third. The drug, however, is not a quick-fix cure, and Tedros said on Monday that it should only be used to treat the most serious cases, and under medical supervision.

The spike in cases comes as much of the world loosens lockdown measures put in place to halt the spread of the deadly illness. The European tourism hotspots of Spain, Italy and France are all gearing up to receive visitors again this month, while ‘Black Lives Matter’ protests saw tens of thousands of people flood the streets in cities across the US since the killing of George Floyd last month. Prior to the protests, the media and public health officials had repeatedly warned of the dangers of a hasty reopening.

“The world is in a new and dangerous phase,” Tedros warned last week. “The virus is still spreading fast, it is still deadly, and most people are still susceptible.” 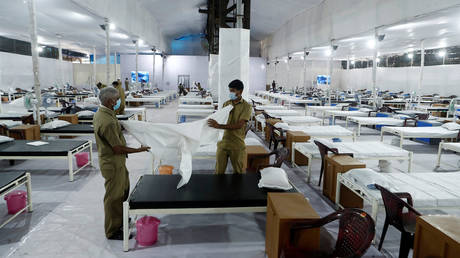