Vogue Portugal has apologized and pulled a controversial cover over claims it was glamorizing mental illness. The publication had first attempted to stand by the cover, which features a woman modelling as a psychiatric patient.

The magazine faced swift backlash on Friday after posting an image of the cover — one of four for its so-called “madness issue” on mental health —  to Instagram.

The image shows an anxious-looking model crouched in a bathtub surrounded by two nurses wearing old-fashioned uniforms, one of whom is pouring water over her head. The set is clearly designed to look like a shabby bathroom in an old-style mental asylum.

Many on social media took immediate issue with the aesthetics.

In a comment on Vogue Portugal’s Instagram page, Portuguese model Sara Sampaio slammed the shoot as being “in very bad taste” and said the images “should not be representing the conversation” about mental health.

Others said the imagery “harks back to archaic, traumatic therapies” while another said the photo shoot was “glamorizing mental health institutions.” British actress Denise Welch, who has penned a book about her struggle with depression, said that the cover was “perpetuating the stereotype of a poorly girl in a mental asylum” and questioned why no one “out of the whole editorial team” thought the cover was problematic.

Needless to say, online commenters were also angry about the fact that the magazine had dubbed its latest installment the “madness issue” with one saying it sent an “awful message” to people suffering from mental health issues.

Vogue Portugal initially tried to wave the controversy away, explaining that the cover story was intended to explore “the historical context of mental health” and was “designed to reflect real life and authentic stories.” The magazine also tried to tone down the anger by adding that the model in the photo is featured alongside her real-life mother and grandmother.

Yet, by Monday, the publication had backtracked, posting a statement to its Instagram saying it “deeply apologizes for any offense or upset caused” by the photo shoot. “On such an important issue such as mental health we cannot be divided,” it said, adding that the subject “needs a more thoughtful approach.”

The fashion industry has long been accused by critics of ignoring or making light of mental health issues. In September, model Ayesha Tan-Jones famously walked on a runway in Milan with the words “mental health is not fashion” written on her palms in protest at a Gucci coat designed to be reminiscent of a straitjacket.

Yet, it appears Vogue’s latest attempt to go woke on the issue has failed miserably. 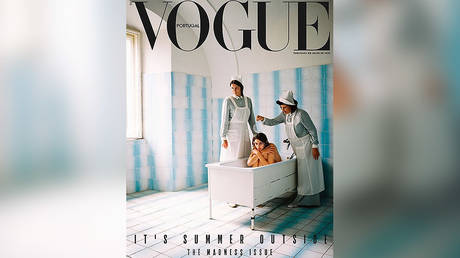