The explosion of several enormous stars could have caused at least one mass extinction event on Earth, according to an exciting new theory that has scientists combing deep rock layers in search of tell-tale radioactive remnants.

In a new study, researchers have proposed that an extinction event 359 million years ago may have been the result of at least one, if not many more, supernovae explosions that bathed the Earth in starfire between the Devonian and Carboniferous periods, which began around 419 and 358 million years ago respectively.

They point to hundreds of thousands of generations of plant spores apparently toasted by ultraviolet light as an indicator that the ozone layer may have been partially burnt away throughout this period.

While more relatively mundane events here on Earth, such as large-scale volcanism can also destroy the ozone layer, the evidence for such events during the time period in question is largely inconclusive, astronomy and physics professor Brian Fields argues.

“Instead, we propose that one or more supernova explosions, about 65 light-years away from Earth, could have been responsible for the protracted loss of ozone,” the University of Illinois at Urbana-Champaign scientist explains.

The team considered additional contenders for ozone depletion, such as meteorite impacts, solar flares and gamma-ray bursts, but each of these would be too short-lived to explain the long-term and intense UV light exposure characterized by the plant spore evidence contained within the rock from the Devonian period.

In contrast, a supernova neatly fits the bill, given the upfront barrage of UV light, X-rays and gamma rays from the initial explosion, followed by a secondary bath of cosmic rays and supernova debris, all potentially combining to create a fallout that could last 100,00 years.

“To put this into perspective, one of the closest supernova threats today is from the star Betelgeuse, which is over 600 light-years away and well outside of the kill distance of 25 light-years,” said graduate student and study co-author Adrienne Ertel.

Initial fossil evidence analyzed by the team indicates a 300,000-year fallow period during which biodiversity declined dramatically prior to the mass extinction event, indicating the possibility of a galactic cluster bomb of multiple supernova explosions in a (relatively) short period on the cosmic scale.

The researchers explained that massive stars usually occur in clusters, so the explosion of one enormous star is likely to trigger more supernovae.

For now, the team is hunting for the radioactive isotopes from this time period which they argue would be conclusive evidence of their cosmic ray-powered extinction event. 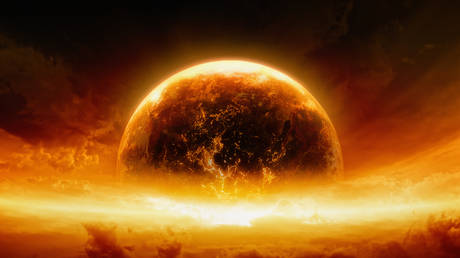