The enormous caves left behind in the aftermath of lava flows could be havens for alien life forms on other planets. Experts say we should be aiming to explore these fascinating extraterrestrial caverns.

After molten lava erupts out of the earth and spills into the surrounding countryside, it often leaves behind huge, underground cave systems called lava tubes.

On our planet, they’ve become a prime target for adventurous cave explorers. Scientists say we should also be trying to explore them in other worlds too, because they could have provided alien life forms with a refuge from harsh conditions.

There’s already plenty of evidence of volcanic activity on Mars, and an article published in the US’ Proceedings of the National Academy of Sciences (PNAS) journal has set out the case for why Martian lava tubes could harbor evidence of life.

While the surface of Mars is now an arid, oxygen-deprived, radiation-saturated wasteland, it was once wet and warm, and may have hosted life. Beings that managed to migrate to the underground caverns may have managed to survive on the Red Planet.

“If Mars ever hosted life, it may have moved into such refugia as the planet evolved and surface conditions became increasingly harsh,” the author of the PNAS article, Sid Perkins, explained.

But there remains the small task of exploring the subterranean Martian world. Experts say that would be best left to robots, as it’d be far too dangerous for humans, should we ever get there.

To explore the deep pits on Earth’s moon, geologists from NASA’s Jet Propulsion Laboratory have already proposed a robot called the Moon Diver, which can abseil, and boffins believe a similar concept could work on Mars.

If space agencies ever do send a mission to explore Martian lava tubes, they’ll have plenty of targets to choose from – the US Geological Survey’s Astrogeology Science Center has collected the locations of more than 1,000 candidate cave entrances on the Red Planet. 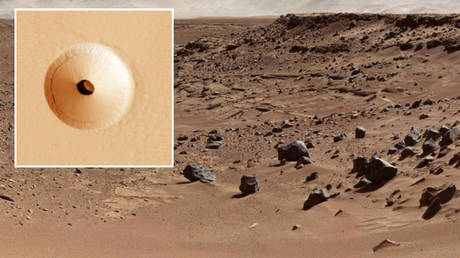