Astronomers have revived an ambitious plan for a liquid-mirror telescope on the Moon that would be so powerful that it could observe the first stars that were ever formed in the universe in the aftermath of the Big Bang.

The concept of a liquid-mirror telescope on the Moon was originally put forward over a decade ago, but the plans were shelved. A team of researchers have now dusted down the idea and are set to publish a paper saying that such a telescope would be able to show the birth of the universe’s first galaxies.

The leading theory suggests that the very first stars formed around 13 billion years ago, before galaxies came together. The mooted moon telescope holds the tantalizing potential to peer back through the fog of time and examine the early days of the cosmos.

“The emergence of the first stars marks a crucial transition in the history of the universe, when the primordial conditions set by the Big Bang gave way to an ever-increasing cosmic complexity, eventually bringing life to planets, life, and intelligent beings like us,” explained the study’s co-author Volker Bromm, of the University of Texas at Austin.

Current and near-future telescopes do not possess the power to capture this “moment of first light.” The researchers say it is therefore important to plan the creation of an “ultimate telescope.” “One that is capable of directly observing those elusive first stars at the edge of time,” Bromm said.

The moon telescope would be a dramatic departure from current technology. Its mirror would be a vat of spinning liquid, with a surface layer of reflective, metallic, liquid, such as mercury.

The mirror could be built into a crater at one of the Moon’s poles and it would need to measure 100 meters in diameter. Its size and location would also make it incredibly powerful. An added advantage of a liquid-based telescope is that it would be easier to transport to the moon than traditional models. It could also be solar-powered.

The idea of a telescope on the Moon isn’t unique to the liquid-mirror model. NASA is also funding investigations into a radio telescope idea that would transform a lunar crater into a dish. 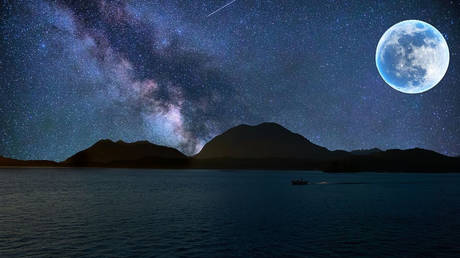