Chancellor Angela Merkel has told Germany’s parliament that restrictive measures to slow the spread of coronavirus could remain in place through Christmas and into early January.

While other European nations are preparing to relax rules for the seasonal break, Merkel told MPs “We have to say, unfortunately, that we cannot promise an easing for Christmas and New Year’s,” adding that measures could remain in place for most parts of Germany until the beginning of next year.

The announcement comes after Merkel held a seven-hour video meeting with the leaders of Germany’s 16 federal states, agreeing to extend and tighten the restrictions that have been put in place, as the number of new daily cases in the country is still considered to be too high and intensive-care units remain at risk of being overwhelmed. The government has set a target of reducing infection numbers to below 50 cases per 100,000 residents before restrictions can be lifted.

Germany began a month-long nationwide lockdown on November 2, with bars and restaurants closed, while schools and shops remain open. From December 1, private gatherings will be limited to five people, masks will be required in certain situations, such as in schools, and international travel will be strongly discouraged.

Ahead of the Christmas period, if people wish to gather with families, they will be asked to undergo a period of voluntary self-isolation before and after the holiday period, and employers will be asked to allow people to work from home to avoid the risk of infection.

The novel coronavirus has spiked in Germany in recent months, with the country approaching one million confirmed infections, having reported 18,633 new cases on Wednesday, as well as the highest single-day increase in deaths, 410, since the pandemic began. 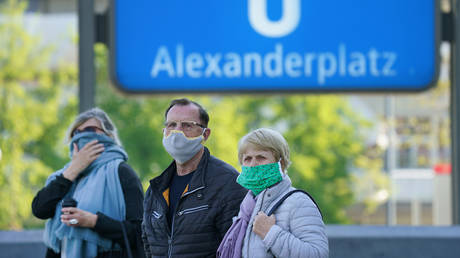 Bitcoin will get rid of all empire...