German Foreign Minister Heiko Maas will try to ease the growing tensions between historic rivals Greece and Turkey. Berlin fears that the standoff in the eastern Mediterranean could lead to greater conflict.

Maas will embark on a mediation mission to Athens and Ankara on Tuesday, Germany’s Foreign Ministry spokesperson Christopher Burger said. He added that “direct dialogue and mutual steps toward de-escalation are necessary in order to find a solution to the tensions.”

We are concerned that these tensions are putting a strain on the relations between the EU and Turkey, and if the tensions continue to increase, further escalation could have even more serious consequences.

Over the years, Cyprus and Greece have been protesting against Turkish ships carrying out drilling and exploration of oil and gas fields in disputed waters.

The situation escalated earlier this month when Ankara sent a military escort along with its survey vessel operating near a Greek island off Turkey’s southern coast. Greece dispatched its own warships to monitor Turkish operations, while France sent its naval forces in support of Athens.

Turkey responded with belligerent rhetoric, with President Recep Tayyip Erdogan saying that “no colonialist power or threat” can deter Ankara from exploring natural resources in the eastern Mediterranean Sea. 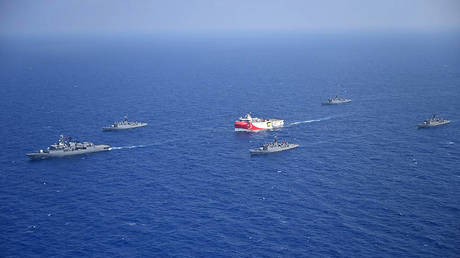 Russian economy to contract under...