The German Justice Ministry is reportedly demanding the messaging app Telegram open itself to law enforcement and pay a multi-million euro fine. The news comes after an elite police unit was disbanded over extremist group chats.

Every month, more than 500 million security-conscious smartphone owners use Telegram. The app encrypts all chats and calls, and Russian-born founder Pavel Durov has not embraced the censorship or collaboration with law enforcement that his Silicon Valley competitors Facebook/WhatsApp’s Mark Zuckerberg and Twitter’s Jack Dorsey have.

Amid reports of drug markets, criminality, and the spread of “misinformation” on Telegram, Durov has consistently denied state authorities access to his users’ data. Privacy is paramount, and the company’s selling point. “To this day, we have disclosed 0 bytes of user data to third parties, including governments,” reads a statement on Telegram’s website.

The German government isn’t happy with this arrangement, however. In an article profiling Durov, Der Spiegel revealed on Friday that the German Justice Ministry is demanding the platform “make itself accessible to the authorities … delete criminal content promptly and … actively pass on user data to investigators.”

Germany’s Network Enforcement Act requires Facebook, YouTube, and Twitter to delete any illegal or harmful content that is reported to them. The act did not previously apply to Telegram, but the Justice Ministry now wants it to comply.

On top of that, the Federal Office of Justice, operating under the auspices of the ministry, is investigating Telegram for not offering a criminal complaint procedure, and for failing to nominate a contact person for the authorities. The company could be fined up to €55 million ($66.6 million), Der Spiegel reported.

News of the apparently impending crackdown comes just a day after the authorities in Frankfurt dissolved an elite police unit. The special operations command, known as SEK, was disbanded after some 20 members of the force used messaging apps to exchange extremist content, including images of Adolf Hitler and swastikas, which are outlawed in Germany.

It is unclear which apps the officers used, but previous crackdowns on right-wing extremism in law enforcement circles have centered around WhatsApp group chats. Unlike Telegram, Facebook-owned WhatsApp cooperates with the authorities to remove illegal content. 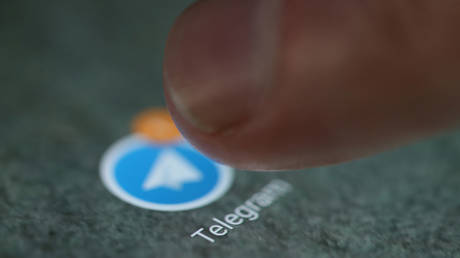